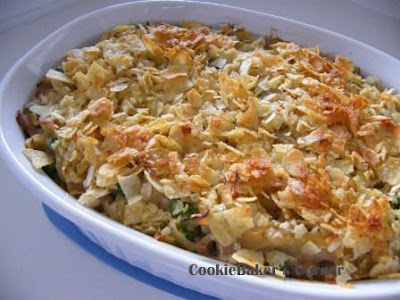 I arrived at Michael’s on Saturday and we made do with meals consisting of take-out and my leftover fish and chips lunch from Red Robin that I had the day before. With nothing planned for cooking on Sunday, I took inventory of what we had and found tuna, cream of mushroom soup, noodles and frozen peas, so I decided to make a Tuna Noodle Casserole. The only thing I needed was potato chips and since we don’t keep those around the house, because chips are a weakness of ours, I did need to make a quick trip to the supermarket to pick up a bag.


I can’t remember the last time I even had tuna casserole, it’s probably been at least……..well, let’s just say it’s been a long time. But for some reason, I’ve been thinking about it and craving it for several months, so the decision to prepare it for lunch wasn’t difficult. Since I have never made tuna casserole before, I began my search and found a couple of recipes that looked a little like the casserole I remember eating as a child. Then I decided to ask the maker of the tuna casserole of my past, my sister Jean. When I was little, I used to spend a lot of time with my sister and her family, mostly because her children, my niece and nephews, were only a few years younger than me and we often played together, and she and her family also spent a good bit of time at my parents’ home, so I ate a lot of my sister’s cooking. Even though she has always been a good cook, and I’ve enjoyed a lot of her delicious meals over the years, this has been one of her dishes that I remember the most. I imagine, since money was tight for her young family, it was a cheap and easy meal to prepare for a family of five, and her little sister, therefore was made frequently.
Between what I found on the internet and some input from Jean, I was able to come up with the following recipe.
Tuna Noodle Casserole
Print Recipe

Preheat oven.
Crush potato chips and set aside.
Cook noodles according to package for al-dente, and drain.
In a large bowl, combine noodles, soup, milk, tuna, peas, salt and cheese, if using; mix to combine and coat well.
Pour into a buttered baking dish.
Sprinkle crushed potato chips evenly on top.
Bake, uncovered for 30 min until bubbly.
Servings: 4 to 6


Notes:
I had some tuna in foil packages on hand so used 6 (2.6 oz each) of those.
Cream of celery soup may be used in place of cream of mushroom. 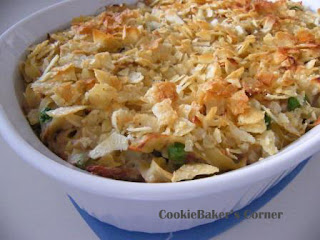 I know, I'm missing step by step pictures. Well, first, I really hadn't planned to blog about this just yet but then changed my mind and second, this is such an easy dish to prepare that I really don't think pictures would be that helpful. It's basically a mix and dump recipe....I think there were a lot of meals like that in the 60's and 70's. 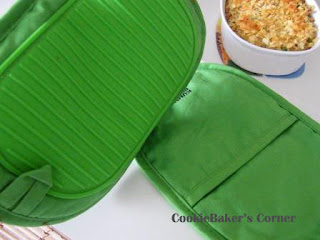 Wanted to show you these cool new oven mitts that I just bought. I always worry about dropping the casserole dish when I use my other mitts since the dish doesn't have any handles. One day when I was browsing at TJMaxx I found these, they have ribbed silicone pads, great for gripping the dish and my hand slips inside the mitts and are protected from coming in contact with the oven and racks. I also use them when handling my hot cast iron skillet and when taking the insert out of my crockpot when it's hot. I love them! They aren't my favorite color but that was all I could get. 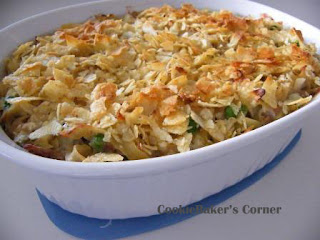 I really don't remember whether my sister's tuna casserole had a potato chip topping on it or not but I liked the idea so went with it. I put some chips in a plastic food storage bag and squeezed until they were crushed. 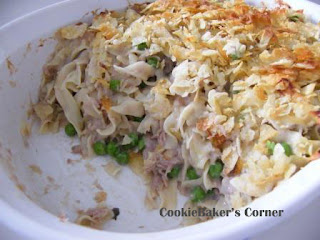 Michael was more than ready to dig in. By the time I got back from Giant Eagle, he was hungry and even grabbed the bag of chips and started eating those. I was afraid there wouldn't be any left for the casserole. 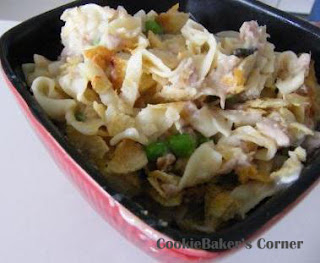 He's a little bit of a messy guy - I should have cleaned off his bowl before taking the photo but he didn't want to wait that long, I'm surprised he stopped long enough for me to take this picture. Don't try to touch the dish of a starving man. 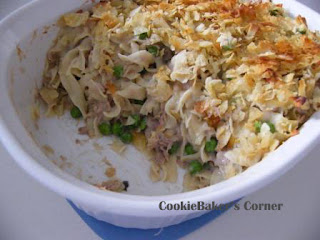 I didn’t know if Michael liked tuna casserole and really wasn’t sure that I still did. When I was little, I used to eat cold spaghetti out of a can and now the thought disgusts me almost as much as it used to my older brother when he witnessed this display. 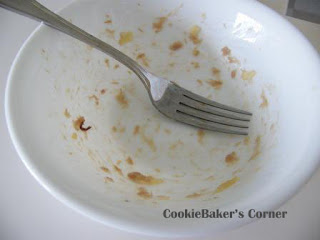 Mmmmm, it's as good as I remember! Michael liked it too and said he wanted to go back for seconds but was afraid of eating too much. This is definitely going to be prepared again.
Posted by Cookiebaker at 7:16 PM 4 comments: