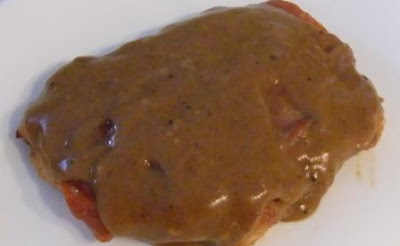 This is my first time to participate in Coast to Coast Cooking on BakeSpace although, this the third time this has been done. I've enjoyed reading the previous threads on this topic and finally decided to throw caution to the wind and join in this time.


To begin with, I had no idea what Saltimbocca was, so I Googled it and found several recipes, some using veal, which I understand is the traditional way of making Saltimobocca, some using chicken and even several made with pork. I decided to prepare mine using chicken....it was interesting to see how many varations there were....I'm sure that will be the case here once we've all prepared our dish. I was happy to see that most of the recipes for Saltimbocca looked fairly easy....a plus for me since, even though I like to cook,  my cooking skills are limited......I'm actually a better baker.
The most difficult time I had in purchasing the ingredients and making this dish was the wine....I don't know much about it (actually, I know very little) and have never developed a taste for it, even though I've tried many times. So, while in Kroger I went into their wine section.....they seem to have a fairly decent selection of wines (at least that's how it looks to someone with my limited knowledge)....must be because it's in a college town. I was looking for a dry white wine.....dry wine.....what does that mean.....how can a liquid be dry? I don't know.....I'm confused already...not a good sign. Anyway, I read the label on almost every bottle of white wine until I found two or three that mentioned dry....whether these wines were good, I have no idea, but chose a bottle of, Woodbridge Sauvignon Blanc, mostly because it was the least expensive (neither Michael nor I drink wine, and I didn't want waste the better part of a $20 or higher bottle).....the whole time praying that it was a wise choice.
Before I begin, I want to apologize for the lack of pictures....I get busy cooking and forget to take a photograph so I don't have an image of each step of the recipe. I guess if I do this enough, I'll get the hang of it...... 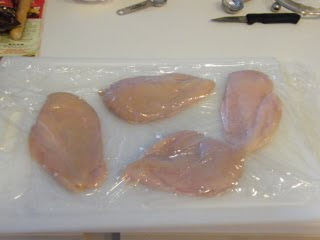 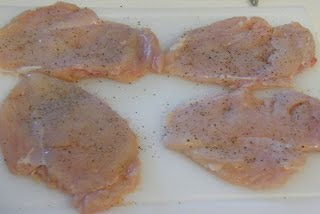 Sprinkle chicken with salt and pepper. 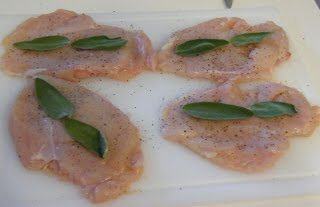 Place 2 sage leaves atop each chicken breast half. 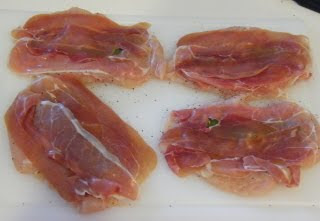 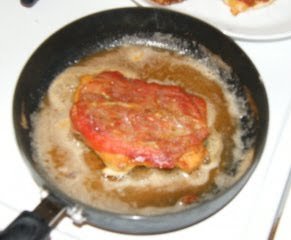 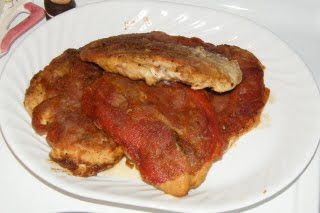 Turn chicken over and cook just until cooked through, about 3 minutes. Transfer to platter and cover to keep warm; reserve skillet. 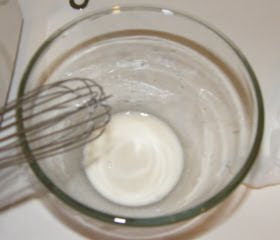 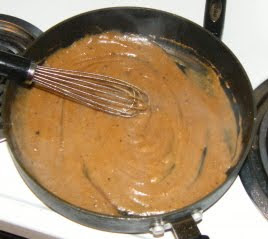 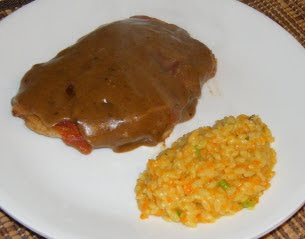 Spoon sauce over chicken.
This was very good! I was afraid that the chicken might be too dry, but it wasn't and the sauce had a subtle tartness from the lemon.  I think the only thing that I would change in making this again would be that I wouldn't bother with the 2 T of wine when making the sauce....I'll use chicken broth in the future. Since we don't drink wine, we have almost a whole bottle of wine left over.

Michael, the take out king, was watching me (he also helped some - was a big help except for when tossing my wine/flour mixture down the sink just when I needed it.) and asked if making this meal was worth all the trouble. It really wasn't that difficult and the result was definitely worth it. I asked Michael what he thought of the dish, and he said it was good, but then he isn't a picky eater....I did notice that he went back for seconds. I guess actions do speak louder than words.
Cooking Saltimobcca Coast to Coast Clickable Map

BakeSpace Link to Pictures and Blogs
Coast to Coast Saltimbocca - Links and Pics
Posted by Cookiebaker at 6:00 PM

hahahaha you crack me up girl! I'm sure Michael DID love it...especially if it tasted as good as it looks! BTW, I didn't know what Saltimbocca was either! HA!

Very cute!! I'm so glad you joined in on our little venture. I didn't know what Saltimbocca was either!! (that makes 3 of us so far hahaha). I love the idea of adding the lemon to the sauce. YUM!

Love it, I think the lemon is an excellent idea.... Beautiful!!!

Since I don't drink wine either, I usually buy the little four packs of small bottles. Then I don't waste it. (I just learned this trick... I wasted TONS before!!) But it adds such a nice level of flavor to soups, sauces, gravies, all kinds of stuff!

I hope you keep playing with us!

looks great..this was a lot of fun

This looks terrific! I am so glad that you "threw caution to the wind" and played along with us. Isn't just loads of fun? I can't wait for the next one!