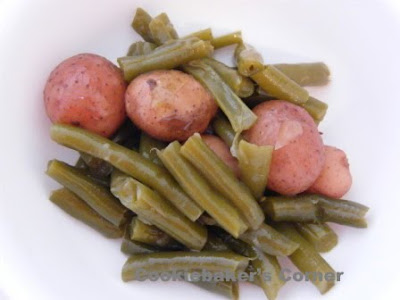 As a child one of my favorite vegetables was green beans….especially if they were fresh homegrown beans. I remember summers when my mom would prepare fresh green beans….after she rinsed them off; she would bring a large pan of beans into the living room and snap them while watching TV. I would usually help…I always liked to snap them; and still do. It seemed like we rarely had to buy them, we usually knew someone who farmed or had a small garden who was willing to provide us with all we could eat. If, for some reason, we weren’t lucky enough to be on the receiving end of free green beans, we could always find a small vegetable stand while driving through the country. A sad sign of the times….these small family vegetable/fruit stands are practically nonexistent and we now have to limit ourselves to buying lovely homegrown produce to Saturday’s farmer’s markets.

I prepare my green beans pretty much like Mom used to. She would put a big pot on the stove (she was usually cooking for a lot of people) put the green beans in the pot and covered them with water, put in some type of ham/bone, salt and usually added small red potatoes then she would cook them for several hours. While she was working around the house, she would run out to the kitchen to check her beans, making sure the water didn’t boil off and scorch them. She always managed to get to them in time but sometimes she would have a close call. As I said I prepare green beans in almost the same way, the only difference is the quantity (I’m not cooking for a large family) and in how they are cooked….I use a Crockpot. When using a Crockpot, I don’t worry about the beans cooking dry and can let them cook several hours without worry.

This is another recipe that isn’t actually a recipe…..it’s more a list of ingredients.

green beans - I use about 2 pounds, cleaned, ends cut off and bean cut/snapped in half or thirds (depends on the length of the bean)
small red potatoes - I put in several, you want plenty but you want more beans than potatoes.
ham/bone -I buy ham shank/bone, you can usually find them at the supermarket for about $1.00 each and usually come one or two per package
water, enough to cover the beans
salt - I use kosher and add some in the beginning and then when beans have cooked about 4-5 hours, taste and usually have to add more.
onion - chopped - I don't always use onion but this time I did add some at the last minute
Ham Soup Base, 1 heaping teaspoon, optional - the beans are delicious without but this just adds a little extra flavor.

Put all of the above ingredients in a Crockpot/slow cooker and cook on high for approximately 5-6 hours. The time will vary...it depends on how firm/soft you like your beans and on your Crockpot. I have several Crockpots and each heats a little differently. 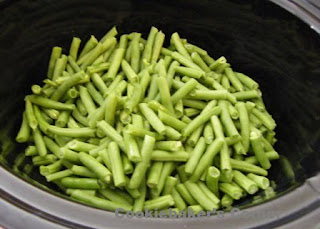 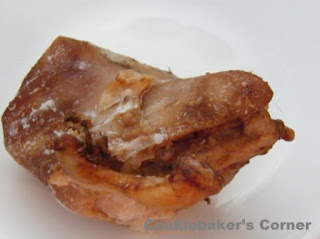 Ham shank or soup bone - if you can't find this in the section where ham is sold, check with someone at the meat counter. 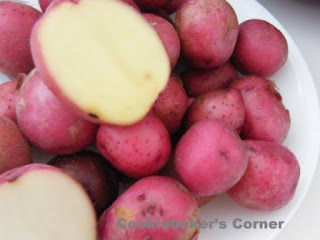 Small red potatoes - I was lucky enough to find some very small ones at the farmers market. Scrub the potatoes to remove dirt and put them in the Crockpot. If the potatoes are a little large, cut them in  half. 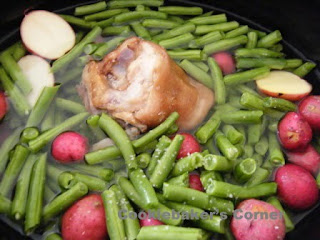 Put everyhing in the Crockpot and cover with water. 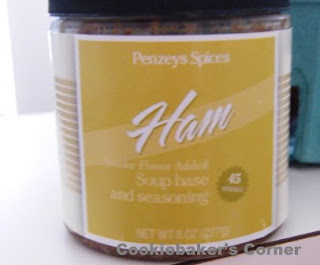 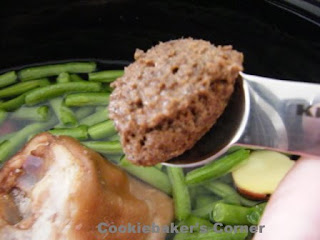 I add a heaping teaspoon of Penzey's Ham Soup Base to the water. If you don't have a store near you or don't want to order it, the beans will still be delicious without. The only other product that I've seen like this in some supermarkets (I've seen it at Meijer, Giant Eagle and maybe Kroger) is Better than Boullion...they make a ham base. I've never used that so can't comment on the product.

Cover the Crockpot/slow cooker and cook on high for approximately 5-6 hours.

You may want to leave the house while this is cooking....the aroma could make you faint with hunger, even if you weren't hungry to begin with. These taste so good, it could make you cry!
Posted by Cookiebaker at 12:36 PM

I have memories like that from when I'd visit my grandmother....snapping peas while watching tv. This is my favorite way to make them too (only I've never used the ham soup base). The crockpot is a great idea.

Awesomeness, I cannot wait until the green beans are ready... Course for me it will be awhile, they are just starting to climb the trellis... LOL YUM!!!

oh girl, you did just take us back! I've been craving this too...I was going to plant beans this year and then waited too late. Guess I'll have to hit the farmers market.

I like to eat vegetables and fruites very much because they are very beneficial for our health and they are tasty also. Green beans are one of my favourite vegetable and the recipe you have shared is really nice.
florida villas