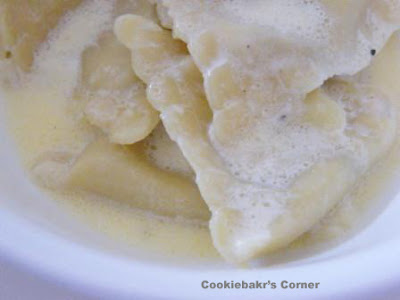 I was in Costco about a month ago and was looking in their refrigerated food section when I came across a container of Grilled Chicken and Mozzarella Ravioli. I’ve purchased ravioli before but have only been able to find beef or cheese filled and once in a while spinach and cheese but never anything that looked this good. So I purchased it, took it home and put it in the freezer to use later.

I kept thinking about this ravioli and wondering how I would serve it…as much as I love red sauce, it just didn’t sound like it would go that well with this ravioli. A few weeks later, I decided on Alfredo….this would be wonderful served with an Alfredo sauce. I’ve never made Alfredo sauce before so now had to search for a recipe. I pulled out my trusty Fannie Farmer Cookbook, which is my favorite cookbook, and searched for the sauce, then went online to look too. Eventually I decided on the one in the cookbook.

Alfredo
from The Fannie Farmer Cookbook, by Marion Cunningham

Have a large bowl warmeed and ready before you cook the noodles. Drain the cooked noodles and put them into the bowl. Quickly add remaining ingredients, tossing briskly to coat all the noodles, and serve at once. Serve over 1/2 pound noodles, 1/4 inch wide.
Makes enough for 4 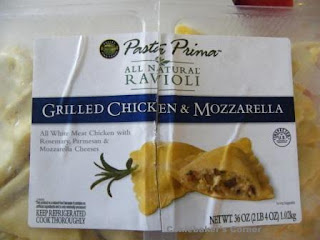 This was actually two separate containers of ravioli so I was able to have it for two different meals. 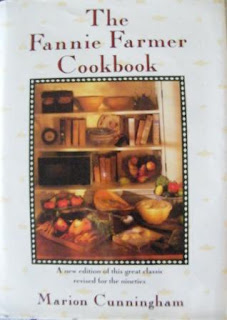 This is my favorite cookbook...it's full of scraps of paper, clippings and a few actual bookmarks, making it easy for me to find my favorite recipes and "how to" instructions. 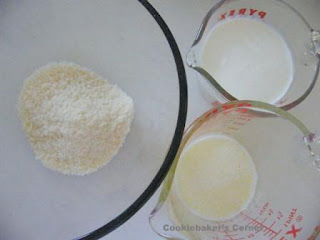 First thing I did was put a pan of water on to boil for the ravioli, then prepared the ingredients for the alfredo...melted butter, grated cheese and warmed milk. 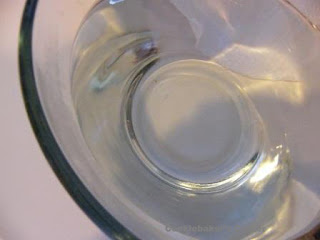 Then while the ravioli cooked, I filled a bowl with hot water. 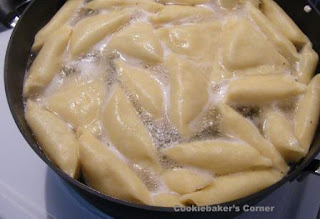 Just before the ravioli was ready to drain, I poured the water out of the bowl and dried it. 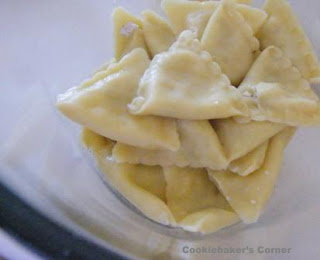 Drain the ravioli and place it in the warmed bowl. 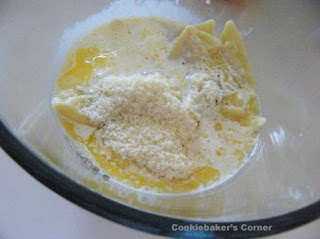 Add the cheese, butter and warm cream, pepper and salt, to taste and gently combine....try not to break up the ravioli. 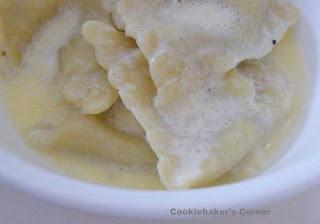 This was easier to make than I expected and good but not as good as I had anticipated. The ravioli itself was delicious but the alfredo, although it had a nice flavor, wasn’t as creamy as I would have liked.* This is the first time that my favorite cookbook has ever failed me! I may try this again and adjust the amount of butter and cream that I use or may just try to find a different Alfredo sauce recipe…..anyone have a good one you would like to share? So the Grilled Chicken and Mozzarella ravioli is a winner, I'll definitely buy that again, but this Alfredo recipe isn’t.

Michael had his own opinion regarding the Alfredo…when I had my back turned, he added this after my negative comment……* But for the rest of us, it was just fine.

Posted by Cookiebaker at 8:05 PM

awww...Michael is sweet! There are so many version of alfredo sauce. the one I like the most is simply butter, parmesan cheese and pasta water. I got it from an italian friend of mine.
I'm going to look for these ravioli next time I go to Costco...they sound really good.

Hi, the secret to good Alfredo sauce is Philadelphia cream cheese. Just add a packet to your other ingredients along with a few heaping teaspoons of additional herbs ( try to mimix the herbs that are already in the raviolo). I would also cut back on the butter from your recipe. Best wishes!