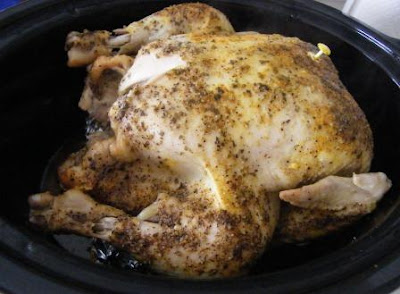 Can you really make a rotisserie chicken in a slow cooker? That’s what I asked myself after seeing a recipe on how to do this. I quickly forgot about making a chicken in the slow cooker until last week, when I saw a video on YouTube showing someone doing this. It looked interesting and, since I like using my slow cooker and would like to use it more often, I decided to make one of my own. Fortunately, Giant Eagle had roasting chickens on sale this week, two for the price of one, so I decided to purchase a couple to test this process.
Slow Cooker Chicken
Printable Recipe

This chicken is moist and tender, just like rotisserie chicken. The skin doesn’t get crisp like rotisserie chicken but we don’t normally eat the skin anyway. If you want a nice brown and crisp skin, just bake the chicken in a 350 degree oven long enough for the skin to crisp up. There will be a lot of rich broth in the bottom of the slow cooker which can be used to make gravy.

Rinse and pat dry chicken.
Spray slow cooker with cooking spray.
Spray or coat entire surface of chicken with oil.
Spread generous amounts of seasoned salt, garlic powder, pepper and marjoram in the cavity and on the outside of the chicken.
Make four or five aluminum foil balls and place in the bottom of the slow cooker.
Place chicken on top of the aluminum foil balls. This keeps the chicken out of the drippings.
Put the lid on the slow cooker and cook on HIGH for 6 hours.

Notes:
1) If you are using a larger slow cooker, you can use a larger chicken. My chicken was about 6 1/2 pounds and fit snuggly in my 6 quart slow cooker.
2) Use any seasonings you wish, the ones listed are just what I had on hand.
3) Know your slow cooker - if you have a newer model it will probably cook at a higher temperature than an older one, so the chicken may not take 6 hours to cook. I suggest checking the chicken after about 3 hours. Mine was done in about 3 1/2 hours. Chicken is done when it reaches an internal temperature of 165 degrees. 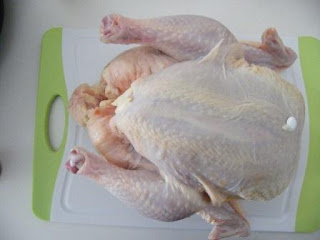 One roasting chicken - I was using a larger slow cooker so I could fit a nice sized chicken in it. The chicken I used was approximately 6 1/2 pounds. 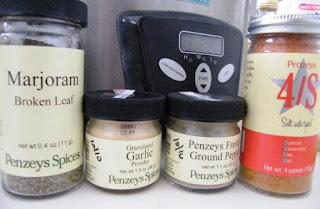 The seasonings I chose were, marjoram, garlic power, pepper and seasoned salt. I wanted to use onion powder but didn't have any. Guess I need to make another Penzey's run...bummer. :) Feel free to use whatever seasoning you like. 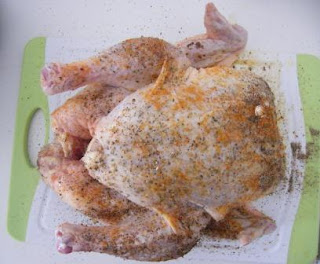 After rinsing and patting dry the chicken, season liberally making sure to put some inside the cavity as well. I also seasoned the back. 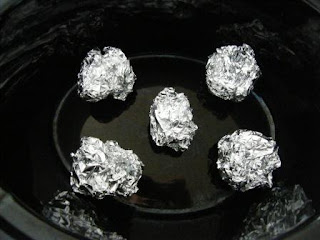 Place four or five aluminum foil balls in the bottom of the slow cooker. 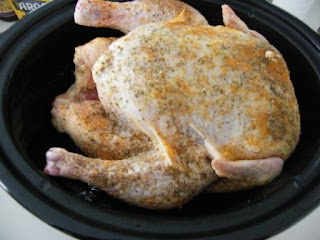 Place chicken on top of the aluminum foil. This will keep the chicken from sitting in the drippings. 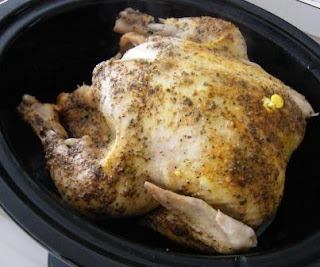 I checked the chicken after about 3 1/2 hours, mostly because Michael went into the kitchen and commented on how the chicken was cooking, and was glad I did because it was done. 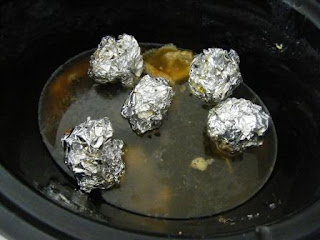 The drippings in the bottom of the slow cooker. I think I left a wing or two behind. 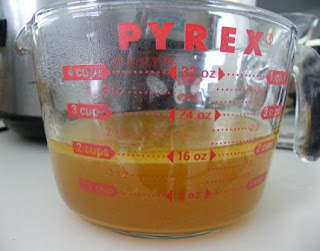 I was surprised at all the nice rich drippings I did get. After removing that top layer of fat, I used it to make some delicious gravy. 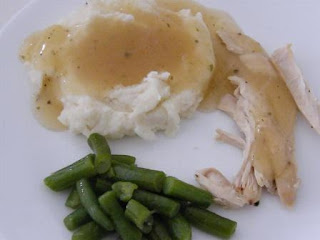 The chicken was very good, moist and tender and as I said earlier the drippings made yummy gravy. As you can see by the picture, the chicken doesn’t get that nice brown crispy skin that is on the rotisserie chickens we buy, but that wasn’t a problem for us since we don’t eat the skin. If you want a crisper skin, put the chicken in the oven for a few minutes until the skin is browned to your liking.

At first I was a little upset that my chicken was done so early but later decided that it actually worked out for the best. I had the meat removed and sliced, the carcass and other parts of the chicken dealt with (in the freezer to make stock later). When dinner time arrived, all I had to do was put some chicken in a baking dish (I also put a small amount of chicken broth in too to keep it from drying out), cover and put in the oven to warm up, make some mashed potatoes and the gravy. Needless to say, we enjoyed it immensely. I will definitely make this again!
Posted by Cookiebaker at 1:04 PM

Email ThisBlogThis!Share to TwitterShare to FacebookShare to Pinterest
Labels: Poultry

I was wondering about "roasting" a chicken in my crock pot today, and I found your link on the QVC forum. How convenient.

I have a small 3 lb organic chicken I just defrosted, and I think I'll try your method! Thanks!

I'm glad the timing worked for you. I hope you enjoy your chicken as much as we did.