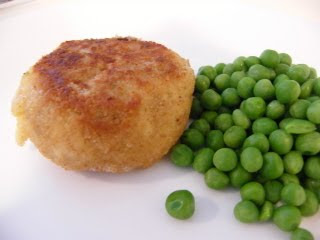 As the title of this post says, this is crab cakes revisited. I made crab cakes, for the first time, about a month ago. I had never made them before so instead of making them from scratch, I chose to use a mix from Williams-Sonoma. Even though the mix was excellent, I still wanted to prepare crab cakes from scratch.....and I finally did.

I've searched for several months for a recipe that I wanted to try  finally coming across one in a cookbook that I recently ordered called,  The Best of The Best from the South East, it contains a collection of different recipes from that region.

Combine all ingredients, except eggs and half-and-half. Form into desired cake size, about 4 ounces each. Make egg wash by combining eggs with half-and-half. Dip crab cakes into egg mixture, then roll into more bread crumbs. Saute' cakes in butter or olive oil until golden brown. 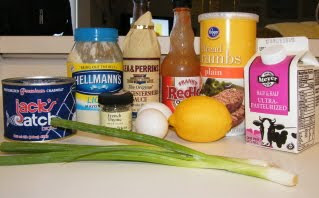 The ingredients. Here in SW Ohio, fresh crab is impossible to find....at least I haven't been able to find it, even going to my favorite place, Jungle Jim's. For those of you who don't know yet, I am a huge fan of Jungle Jim's and when posting to The Breakfast Club forum, on BakeSpace, I talk about this store a lot....so you'll probably see me mention it frequently as well. Anyway, I am able to find some really nice canned crab at Jungle Jim's, so pick up a can whenever I'm there. The recipe calls for Tabasco, but I inadvertently used a bottle of Red Hot sauce instead....I'm not sure if there is a difference between the two or not, but it worked well in the recipe regardless. I also didn't have, and couldn't find, coarse bread crumbs so used whatever I could find at the grocery. 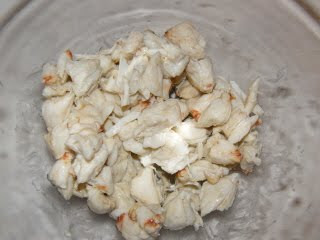 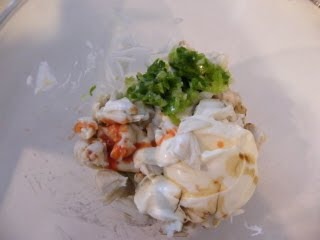 Mixture of crab, mayonnaise, green onion, Tabasco (or in my case, Franks Red Hot Sauce), and Worcestershire. Then mix in bread crumbs. 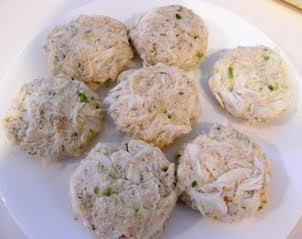 Formed into cakes and ready for next step. 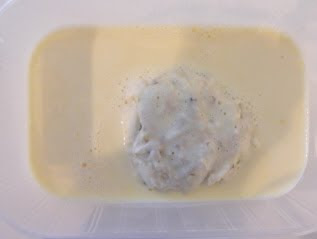 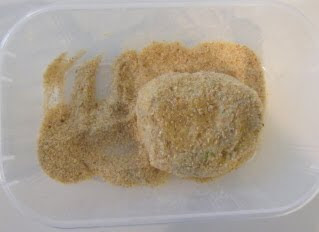 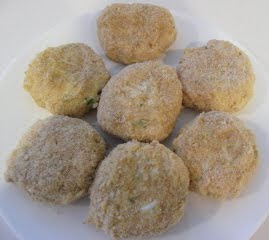 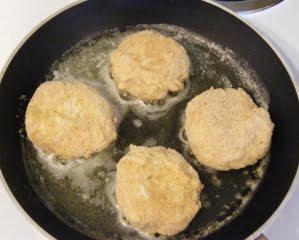 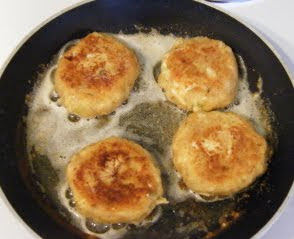 The recipe calls for frying in oil or butter, I like to use a little of both. 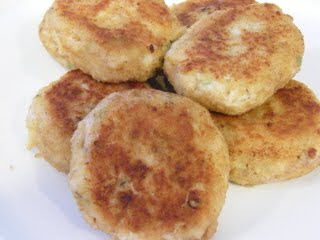 The finished product....yummy!
So my favorite taste tester, Michael, gave these crab cakes excellent reviews. He even said they tasted as good as any he ever had while in South Carolina....interesting comment especially considering that this recipe came from one of his favorite restaurants in Charleston, 82 Queen (minus the Red Pepper Sauce, which I plan to make later), I say that's pretty good review from a man who loves crab cakes as much as he does! Oh....this midwestern, meat and potatoes gal liked them too.
Posted by Cookiebaker at 10:33 PM

Gawd, I love crab cakes...anything crab really. I'm with ya, totally sucks being in the midwest :( The canned crab you found looks good tho, wish I could find nice "lumps" like that LOL

OMG, I really do love a good crab cake... They look Awesome!

Thanks DD and Shane.

DD I am lucky to have Jungle Jim's so close. They do carry some nice "canned" crab back in their seafood section. It's nothing like you would find in a regular supermarket along side the cans of tuna. I always wonder why they don't have fresh crab....they have tons of other fresh fish. I guess I should ask next time I'm there.

I love crabcakes! You did a great job. I use the Frank's Red hot sauce in mine, hubby likes it better than Tabasco.

Yumm looks great!!
I find Frank's to be milder than the Tabasco.

Thanks Patti and tango.

Since I had success using the Franks Red Hot Sauce, I'll probably continue using it. Especially since Michael is still talking about how good the crab cakes were...why tamper with success...