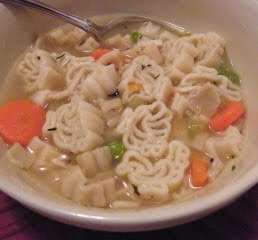 I decided that this year I was going to prepare a Thanksgiving dinner for Michael and me. We spent Thanksgiving Day at my eldest sister's house and had a ton of food but I knew we wouldn't bring home many leftovers. We did bring home a good bit of dessert though. I wanted to have plenty of leftover turkey, mashed potatoes, gravy and dressing...but I mostly wanted the turkey carcass.
A few weeks before Thanksgiving, I was out shopping and wandered into TJ Max and found the cutest pasta....it was shaped like turkeys. I purchased a package planning to make turkey soup sometime after Thanksgiving. 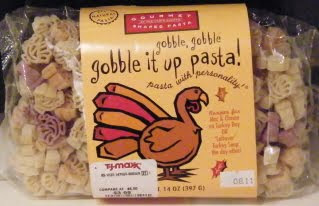 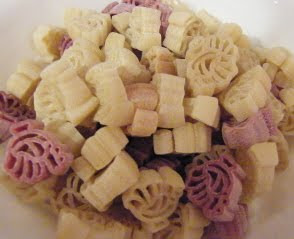 How cute are these?
I prepared our dinner on Friday and after Michael had cleaned the carcass of most of the meat, I proceeded to make the stock.

Having never made stock before, I had to do some research and between doing an internet search and the help of one of my BakeSpace friends, Vicki, went to work.

Put the carcass in a large dutch oven and cover with water. Bring to boil. Then, simmer for approximately 3/4 to 1 hour. Remove turkey and vegetables. Discard vegetables. Bone turkey and refrigerate. (While boning the turkey, let the broth slowly boil to concentrate the broth.) Refrigerate broth so you can skim any fat.

I changed Vicki's instructions a little...Michael didn't have a pot big enough so I managed to get the carcass into a crockpot that he had just purchased. I added everything that Vicki instructed plus put in 2 bay leaves, turned the crockpot on high and cooked for about 5-6 hours.

Place the stock in the fridge overnight - the fat will rise to the top. The next morning, using a large spoon, skim the fat from the top of the stock.

The stock was very good, but I think next time I'll add some peppercorns and garlic cloves in addition to what I used. After further research, I found out that you should leave the peel on the onion (which I didn't) and also when using garlic. Leaving the peel on makes for a stronger flavor.

After I skimmed the fat from the stock, I placed the pot on the stove to heat up. While the stock was heating up, I prepared the ingredients for the soup.

In a skillet, I heated the oil over medium heat. Add the chopped onion and garlic and cook until soft and translucent, about 6 minutes - add to stock, then add the sliced carrots and celery, thyme,  and bring to a simmer; cook until vegetables are soft, about 10 minutes. Just before the vegetables are soft I add the pasta and cook about 7 minutes. Once the vegetables and pasta have cooked, gently stir in turkey and the peas. Simmer until heated through.

One thing I've learned over the years, while helping my mother and sister make vegetable soup, is that you can put just about any vegetable in. The recipe that mine is based on used corn and dumplings where I used peas and pasta.

If you don't eat all the soup and have to store in the fridge, the next time you go to eat it, your pasta may have soaked up a lot of the stock. If you have turkey stock on hand, (I had purchased two cartons for my gravy and dressing and hadn't used it all so added it to the soup) add that to the soup. Chicken stock can be used in place of the turkey. 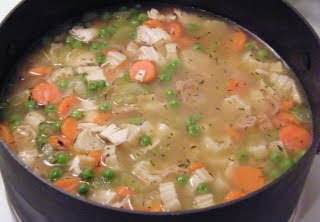 The soup was delcious! Look at how cute it is too! Looks like the color disappeared from the little red turkeys....or the white turkeys gobbled them up....
Posted by Cookiebaker at 6:06 PM

I had no patience for my leftover turkey. I was so tired from making that meal, all I wanted to do was chuck the rest of it. Now I could kick myself. LOL Your soup looks fantastic!

how cute those turkey pastas are!! I made my turkey stock on Sunday (cooked my own Thanksgiving on Saturday for the same reason you did) and I think I'l make my turkey soup tomorrow!! yours looks delish!!