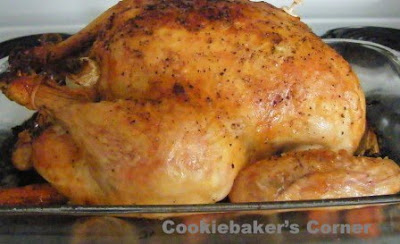 One of my favorite Food Network hosts and cookbook authors is Ina Garten…. I really enjoy watching her show, The Barefoot Contessa. Most of her recipes look very good and I find her to be knowledgeable and her on air personality to be, entertaining and calm, and she doesn’t grate on my nerves like so many of the newer hosts. I think I have almost every one of her cookbooks but am embarrassed to admit that as much as I like her, her program and cookbooks, I’ve only prepared one of her recipes. Years ago I made a brownie recipe and it was fabulous!

I’ve wanted to roast a chicken and wanted to do something a little different than my usual way and had been looking at her Perfect Roast Chicken for about a year or so. I think the thing that kept me from using her recipe was the fact that it called for fennel…I have had no experience with this vegetable…ever. I had no idea what to look for, how to prep this vegetable or whether I would even like it….but part of my cooking experience is to try something new, at least once in a while. How am I to grow as a cook if I don’t try different foods and recipes and techniques….and I have been stuck in a rut lately. So, I pulled out some cookbooks and looked on line to read up on fennel, went to the supermarket and bought one, along with the rest of the ingredients for this recipe and went to work.

Preheat the oven to 425 degrees F. 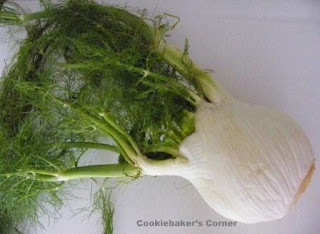 I’ve never cooked with or eaten fennel before….it reminds me of anise…has a mild licorice flavor. I thought, especially after it was roasted and became caramelized that it was quite tasty. I rinsed it off then removed the green tops and just used the bulb. 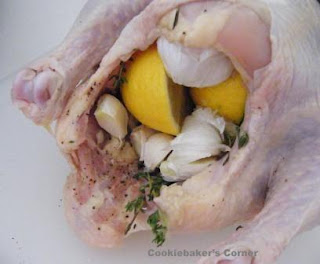 Salt and pepper the inside of the chicken then stuff with thyme, lemon and garlic. 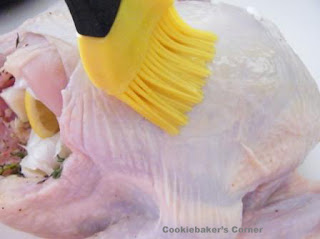 Brush with melted butter. I love these silicone brushes! 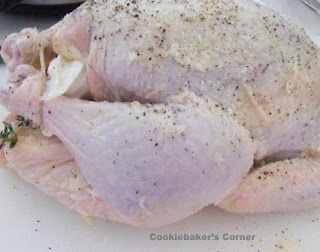 Salt and pepper, tie legs together and tuck under wing tips. 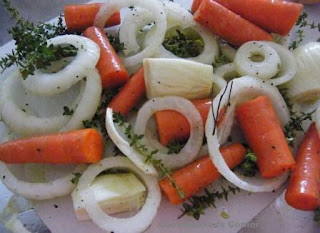 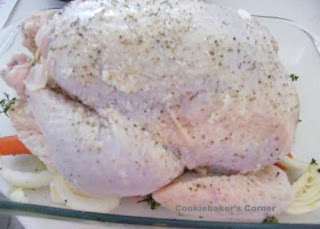 Place chicken on top of vegetables, place in oven and roast for 1 1/2 hours...or until the temperature (taken in breast) reaches 165 degress F. 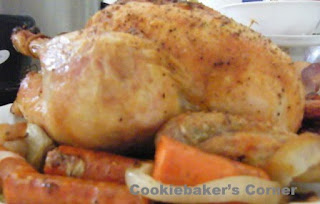 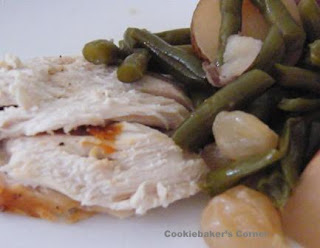 The chicken was delicious....it was moist, tender and I could definitely taste the thyme. The roasted vegetables in the bottom of the pan were nicely roasted and caramelized. There were plenty of drippings in the pan for gravy...I just chose not to make any. I decided to serve the chicken with some recently purchased fresh green beans that I cooked in the slow cooker.

Posted by Cookiebaker at 5:49 AM

Oh yummm
Wish I had read this before I roasted mine!

Oh wow....look at all those yummy goodies inside that bird! It looks fabulous! :) I think I cooked with fennel once, a while back but I don't remember what. I'm pretty sure I like it otherwise I'd remember for sure LOL

Looks yummy. Anything with a head of garlic in it has to be delicious!

I've never used a silicon brush before. Do they hold the butter better? I'll have to get one for my kitchen.

Tango - The chicken was good, I know I'll be using this recipe again.

Danielle - I was surprise but I liked the fennel...tasted a little lik anise...had a mild licorice flavor.

Jessica - I like the silicone brushes, I think they do a good job plus wash up better....you can put them in the dishwasher.