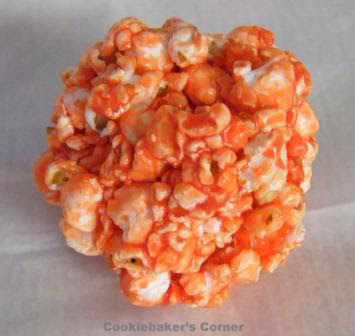 My mom was the creator of our holiday traditions. The way I, my sisters, brothers and even many of my nieces and nephews celebrate have a lot to do with the traditions that my mom set in motion many years ago….I’m sure soon after she and dad got married. I imagine that some of the ways that we celebrated Halloween, Thanksgiving and Christmas got their start during her childhood but I’m sure, since mom grew up during the depression and considering her family was poor, she never celebrated in quite the style that we did when I was young.

The making of Popcorn Balls, to give out for Trick or Treat, was one of our Halloween traditions that started around the time my sisters we little, sometime during the 40’s, and ended in the 70’s. Even though Mom stopped making them, my brother Don continued this tradition with his daughters many years after.

My sister Jean contacted me the other day asking if I had Mom’s Popcorn Ball recipe and if so, would I like to help her make popcorn balls some weekend before Halloween….she wanted to make some to give to her children and grandchildren. I emailed the recipe to my sister and today, with the help of our niece Pam, made popcorn balls for the first time, for me at least, in about 25 or 30 years.

While getting this post ready, I remembered a story that I had written a few years ago while putting together a cookbook for work. I was writing an explanation about the Popcorn Ball recipe I was including in the cookbook and got started and just went on and on….a lot like the post that I’m working on now. I ended up cutting it down a lot for the cookbook but saved the original. I was going to edit it and use if for my blog but then decided to post it in its entirety. I’m sure many of you won’t be interested in the story, so feel free to pass it by but I thought members of my family who read this blog might find it interesting. I wrote this about a year and a half before my mother passed away.

This story is my memory of what would have taken place around 1967 or 1968 when I would have been 10 or 11….my siblings may remember something completely different. :-) 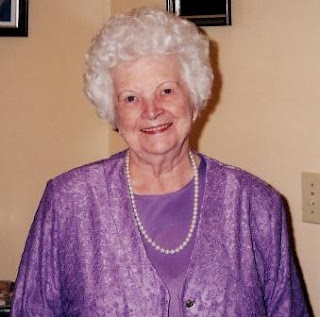 This is Mom taken around 2001 or 2002
Making Popcorn Balls for Halloween
Every Halloween, for approximately 30 years, my family made popcorn balls. My mother started this tradition with my sisters, brothers and me and continued down to the eldest of my nieces and nephews. Making popcorn balls was quite a production and always a fun family project. Every year we would make over one hundred popcorn balls, one time we made 149. I remember rushing home from school, excited and anxious to have dinner over with so we could begin making them. I thought this was almost as much fun as going out for Trick or Treat.

Before the popcorn balls could be made, the ingredients had to be purchased along with waxed paper, Halloween napkins and rubber bands. One or two days before the night of Trick or Treat, we would begin the process of making popcorn balls. First the waxed paper had to be cut into squares large enough to wrap around a popcorn ball. Long sheets of waxed paper would be placed on the kitchen table, the popcorn balls were placed on these after they were formed. Mom would get out the popcorn popper, put oil and popcorn in the pan and place it on the stove to pop; soon the warm kitchen was filled with sounds and aroma of popping corn. Mom would pop several quarts of popcorn until she had enough to make popcorn balls for the neighborhood Trick or Treaters and some left over for our family to eat. Next she would make the syrup. I remember standing by her side watching as she placed all the ingredients in the saucepan and stirred until the sugar melted and the syrup was the right consistency. At that point she would remove a small portion of the syrup from the pan, place it in a cup of cold water, and swirl the syrup around until it hardened and formed a small ball. She sometimes had to do this a few times before the syrup was at the right stage. It felt like it took forever! I didn’t think it would ever be ready so that we could start shaping the popcorn balls, but finally it was. When the syrup was just right, it was stirred into the popcorn and was now ready for us to shape into balls. We’d rub butter all over our hands so we could grab handfuls of the hot syrup and popcorn mixture and not burn our hands while shaping it into balls. No matter how much butter I slathered onto my hands, I inevitably missed a tiny spot between my fingers and the hot syrup would stick to my skin and sting a little. Once all the popcorn was shaped into balls they were wrapped in the waxed paper squares, and then wrapped in paper napkins that were imprinted with Jack-o-Lanterns, Witches and Ghosts, then secured with rubber bands.

On Trick or Treat night the neighborhood children would head straight for our house, hoping to get there before we ran out of popcorn balls, but were sometimes disappointed because they were too late and ended up with candy instead. In later years as our neighborhood changed, all the families who had lived there for many generations were gone, the children grown and moved away, the elders passed on and rumors of tainted treats filled the news, we made fewer and fewer popcorn balls until we stopped completely and just handed out candy.

My sisters, brothers and I are much older now; my nieces’ and nephews’ are grown with children of their own. My mother has Alzheimer’s type dementia and has been in a nursing home since November of 2002 and her memories of our Halloween preparations may be cloudy or non-existent. Even though more than 30 years have gone by, I still remember the excitement, laughter, warmth and scents of our popcorn ball making days.

Pour over corn. Stir corn thoroughly while pouring syrup over it.

* We actually ended up using closer to 5 quarts in each batch....there seemed to be too much syrup in the pan for only 4. 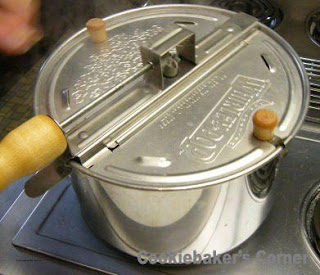 This is the best way to make popcorn.....on the stove. The taste and the texture of the popcorn is much better than air popped or microwaved. You don't need a special popcorn popper like this.....you can use a large pan with a lid, put it on the burner and shake, shake, shake...the pan, not your body. 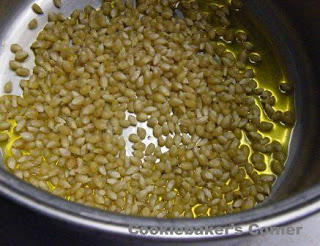 Make popcorn according to the directions on your popcorn maker or the package of popcorn. 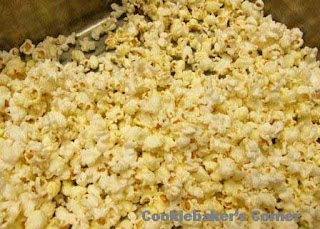 The popcorn is ready and waiting...time to make the syrup. We actually used more than the 4 quarts of popcorn in each batch....there seemed to be an awful lot of syrup in the bottom of the pan. 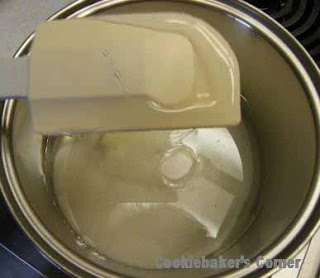 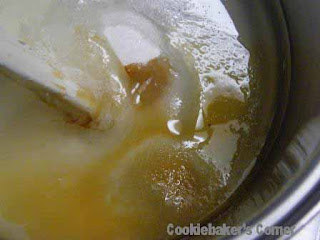 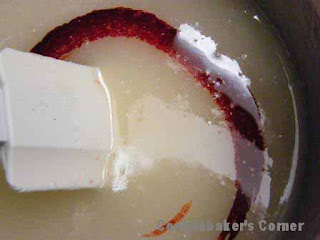 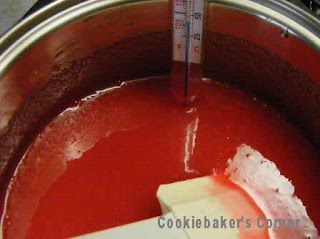 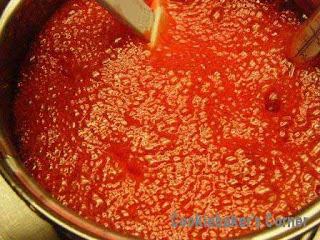 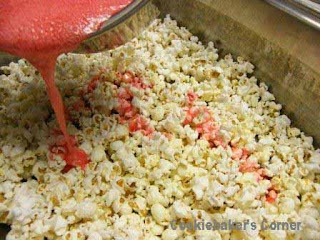 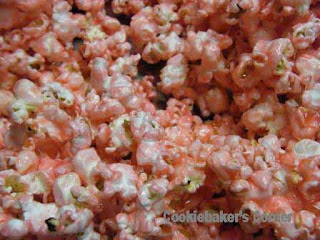 Pour over corn. Stir corn thoroughly while pouring syrup over it. 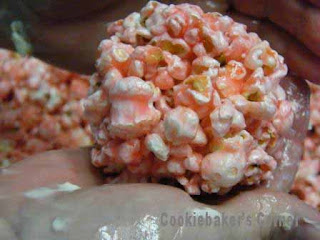 Butter hands lightly...make sure you cover your whole hand because this stuff is hot and sticky. Shape into balls. 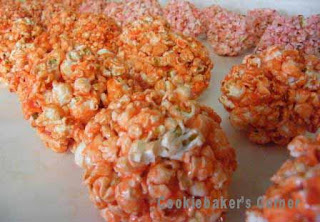 And here they are....popcorn balls. When we first started, we just added red food coloring then Pam decided she wanted orange so she added a little yellow to the red. 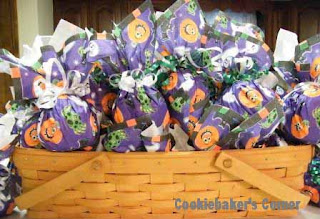 And here they are wrapped up and ready to go. Our first batch was almost like a test batch....we didn't let the syrup get to the right temperature so we had a difficult time getting the popcorn to stick together. After that we made two more batches and they worked out much better. Jean sent Pam and me home with a few popcorn balls and she had plenty to send to her grandchildren in Washington and California and to share with the rest who live near by.

Posted by Cookiebaker at 4:00 AM

That is SO Awesome! We use to make popcorn balls to hand out for Halloween, when I was a kid. Ah, Memories...

This is a wonderful article- and a priceless family story for the grandchildren, great children, and even the great-great grandchildren to have
Thanks for takiung the time to writing and publishing.

What a great story and your mom! she is just too precious. I've never made popcorn balls before....thinking it would be a fun thing to do this year.

Shane - I'm surprised at how many people made popcorn balls to give out for Halloween. I thought we were one of a kind. LOL

Coleen - glad you enjoyed the story. When I was young, Grandma used to tell me stories about the "Olden Days", after she died got a few from Mom. I don't have anyone to tell my stories to so decided to post mine. :)

Danielle - my little mother was cute...and spirited. LOL I miss her so much. I hope you do get a chance to make popcorn balls, they are fun to make, even more fun with others.