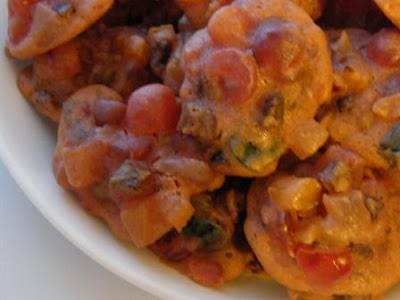 Around Thanksgiving I learned something disturbing about Michael….he likes Fruitcake and Mincemeat Pie. I can’t believe I’ve known him for over two years and didn’t know this. Did he tell me this and I forgot, or did he omit this information? If I had known these were two of his favorite foods would I have continued to date him…would it have been a deal breaker? Too late to do anything about it now…….Ha, ha, ha. Seriously, I didn’t know that anyone under the age of 80 liked Mincemeat Pie….the last time I even saw one was when I was 10 years old and one mincemeat pie would be made at Thanksgiving and Christmas because my grandmother loved it. As for Fruitcake…well, I’m sure we’ve all heard the stories about that so I don’t need to repeat them here. Enough about Mincemeat pie, I’ll save that for another post. Today it’s all about Fruitcake, or rather Fruitcake Cookies.

Most of the time I try to cook and bake things that I know Michael will like so when he told me that he liked Fruitcake, I had no idea what to do…I’ve never made it before and only tasted it a few times. So I asked around for fruitcake recipes….all I heard was the sound of silence….guess no one else likes Fruitcake either, or maybe they do but just buy it rather than make it. Or maybe no one wants to admit that they like it. I had always heard and read that it took weeks or even months to make a fruitcake…first you bake the cake then you spend the remaining time soaking it in alcohol. If that was the case, that was out…I didn’t have the time and wasn’t sure, since neither of us care for alcohol, that we would like that. Not long after I began my search I received an email newsletter from the King Arthur Flour Company that had a link to a recipe for Fruitcake Drops…they looked interesting, wouldn’t take months to make and I do like making cookies, so I decided to try it.

Their recipe includes a lot of the products that they sell, which I didn’t order; I just used what I could find locally. The next time I make these, I may order some of their products to see it makes any difference in the taste and texture of this cookie. I’ve posted the recipe the way I made it and am also including a link to the original recipe.

1) Preheat the oven to 325°F. Lightly grease (or better yet, line with parchment) a couple of baking sheets.

2) In a large bowl, mix together the butter, sugar, salt, and baking powder till smooth.

3) Add the eggs, and beat till smooth and creamy.

4) Add the rum and cherry concentrate and mix, scraping the sides of the bowl. The batter will appear curdled; that's OK.

5) Add the spices and the flour. Mix till smooth.

6) Stir in the fruit. The batter will be heavy and sticky; this is best done in a stand mixer, or using a heavy spoon and lots of muscle power.

7) Using a tablespoon cookie scoop, or a spoon, scoop out balls of dough about the size of a ping pong ball. Space them on the baking sheets, leaving about 1" to 1 1/2" between them; they won't spread much.

8) Bake the cookies for 20 to 22 minutes. They'll appear fairly set, but may still be very slightly shiny/wet looking when you remove them from the oven. The bottoms will be lightly browned.

9) Let the cookies cool, then loosen them from the parchment or pan using a spatula.

10) Store at room temperature up to several weeks, in an airtight canister in layers, with parchment or waxed paper between the layers to keep the cookies from sticking to one another. For longer storage, freeze. 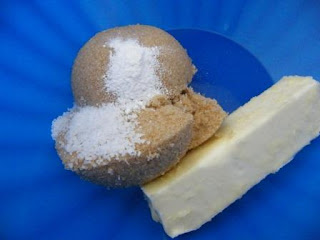 Mix butter, brown sugar, salt and baking powder until smooth. How do you like the pretty blue bowl? I had to use our plastc chip bowl because I wasn't sure our large mixing bowl would be large enough. 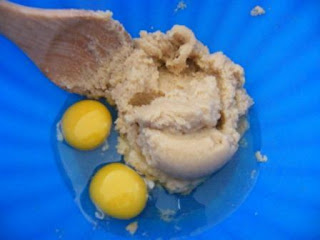 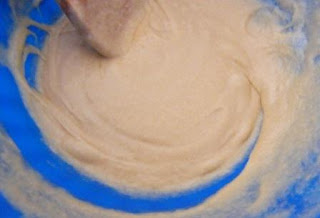 Add eggs and beat until smooth and creamy. 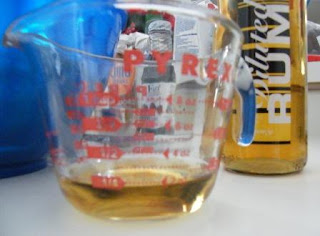 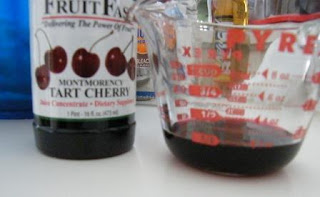 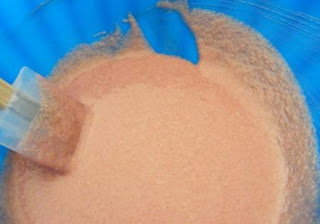 Add liquor and cherry concentrate and mix, scraping sides of the bowl. 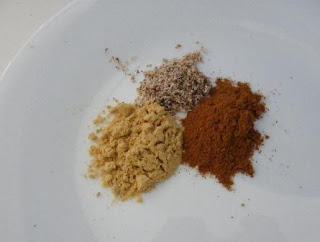 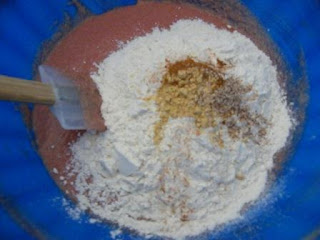 Add the spices and flour to the liquid mixture...... 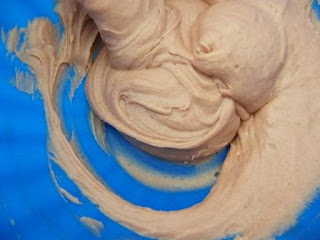 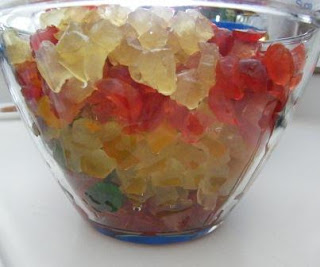 Nine cups of candied and dried fruit. I used mostly candied fruit but think next time I'll use a little less candied and more dried....I'm sure it would be a little better for us. To keep the fruit from sticking to your kitchen shears and measuring cup, spray with cooking spray. 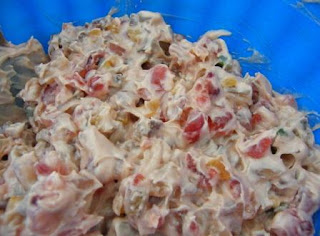 Stir in the fruit. The directions said it was best to mix using a stand mixer because the batter would be heavy and sticky. I used a wooden spoon and didn't have any trouble...I've had a more difficult time hand mixing dough for chocolate chip or oatmeal cookies. 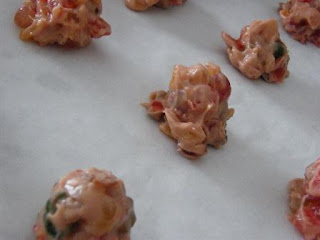 I lined my cookie sheets with parchment paper, I love parchment paper..... the only thing better than this are my Silpat liners but I left them at home. Using a tablespoon cookie scoop or spoon, scoop out dough. Place about 1 inch apart on cookie sheet....I use half sheet baking pans and could get 12 on each sheet. 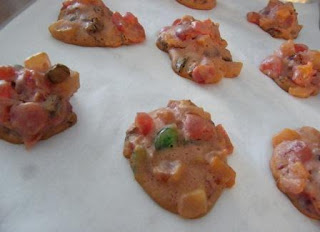 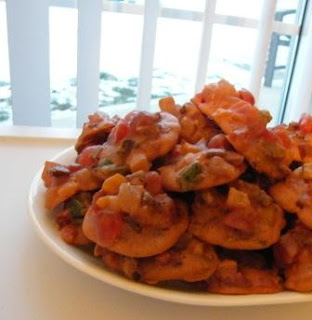 The finished product. By the time I got the cookies baked and cooled I had lost a lot of my natural light so I put a plastic container over in front of the patio door and placed the cookies there. The lighting wasn't the best but was better than it would have been in the kitchen.

The verdict....I liked these cookies and that's saying a lot considering I'm not a fruitcake fan. Michael liked them too....not only did he tell me that he did but proved it by sitting down with a glass of cold milk and eating at least six before they had time to get completely cool. Looks like I'll be making these again.
Posted by Cookiebaker at 9:55 PM

I'm not a fruitcake fan either but these cookies look so cute and I bet they're a lot better tasting than fruitcake! Can't say that I've ever seen a real mincemeat pie....and wouldn't be heart broken if I never did....just the name alone is weird LOL