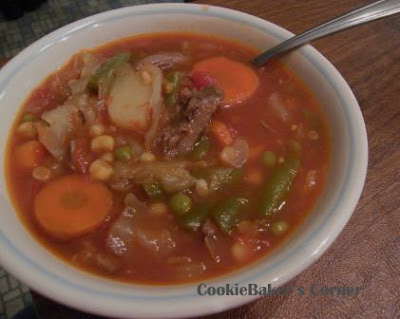 I was sitting at home one day last week when I received an email from my sister Jean, asking me if I would like to get together over the weekend to make vegetable soup. Since I didn’t have any plans, it was the first weekend of Fall and the weather was a little cool and dreary and felt  like soup weather, I agreed to help her make soup.


On Friday Jean called and asked if I wanted to go to Kroger with her to shop for the ingredients. I knew, since we double the recipe (I take some home, she keeps some and gives some to her son and daughter and their families and her adult grandchildren who are now out on their own), it would involve buying and carrying a lot of canned goods, I agreed to help. I drove to her house, picked her up and headed in to town for our shopping but our first stop was at a local Italian restaurant for lunch. We went on to Kroger and after spending 45 minutes to an hour we had our cart loaded with fresh vegetables, canned vegetables, beef broth, beef and cat food. There is no need for concern, the cat food wasn’t used in our soup; it was for her cat and the strays that she has adopted. We loaded the groceries in my car and were soon headed back to her house. The hardest part was yet to come, unloading my car and carrying in all those heavy bags.
Saturday was soup day. I drove to her house where she already had two 12 quart stock pots on the stove with the beef, beef broth and spices simmering. We soon got to work peeling, chopping and slicing the fresh vegetables and then adding all the ingredients to the stock pots. Soon the house started to smell wonderful and not long after that, the soup was ready.
This recipe was originated by my mother. As with most of her recipes, since she cooked according to taste,  mom didn’t have a recipe for her vegetable soup. I remember on soup day, Mom would start out with one pot of soup and by the time she got it to taste the way she wanted, she usually ended up with four large pots of soup simmering on the stove. Fortunately, she had plenty of family and friends to share with. Jean had helped Mom make the soup many times so she knew the ingredients that Mom used and tweaked it a little by adding the bouquet garnet (Mom was a plain cook and seasoned with salt, pepper and plenty of fat), which made it even better, then a few years ago Jean and I worked together to get measurements for the ingredients - we wanted to avoid what I call, Mom’s growing pot of soup.
Vegetable Beef Soup
Print Recipe

1. Wrap bay leaf, pepper corns and marjoram in cheese cloth. In large stock pot, boil beef, broth and spices for about 2 hours.
2. Remove beef and discard spices. Strain broth and return to stock pot. Allow beef to cool. Once cool, cut into bite size pieces, removing and discarding fat. Put beef back in pot. Add crushed tomatoes, onion, celery, carrots and cabbage to beef broth - cook until tender.
3. Add potatoes, and remaining ingredients and cook until potatoes are done.
4. Once all ingredients are combined and the soup has cooked a little, taste the soup and add, salt, bullion or more beef broth if desired. 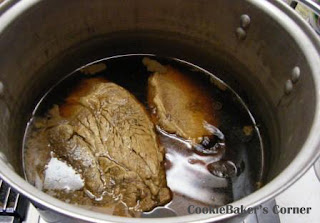 I arrived at my sister's house after she had already started on the soup. This contains the beef broth, beef and bay leaf, pepper corn and marjoram. This is one of the two 12 quart stock pots that we were making. 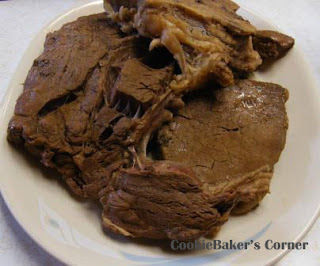 After about two hours, the beef was removed, allowed to cool and then cut into bite sized pieces or shredded. 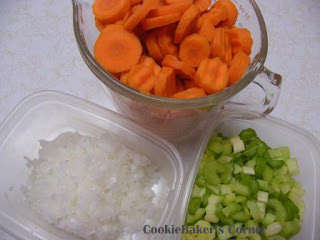 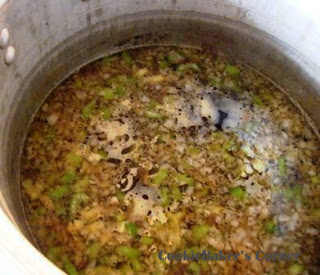 We added  the carrots, onion and celery to the pot and let that simmer while we prepared the cabbage. 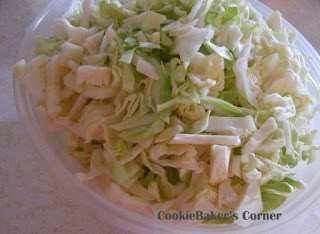 I have to tell you that I'm not a cabbage fan. I do like cole slaw but that's the only way I'll eat it, except in this soup....it really adds a lot of flavor. So please try it at least the first time you make this, by the time the soup is finished the cabbage is soft and almost translucent. 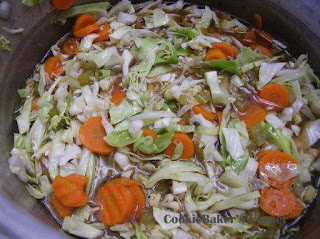 Add the cabbage to the rest of the vegetables in the pot and stir. 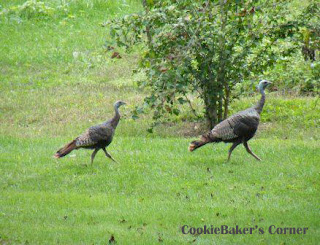 Jean happened to look out the window and saw a couple of wild turkeys. I have never seen wild turkeys before so grabbed my camera and went outside to take their pictures. They didn't like getting their pictures taken so started to move. Unlike the deer around here, they don't stick around when humans are around, but I did manage to get a decent picture of them before they ran into the woods.

Now back to making some soup. They should be glad that we wanted vegetable beef soup and not turkey noodle. 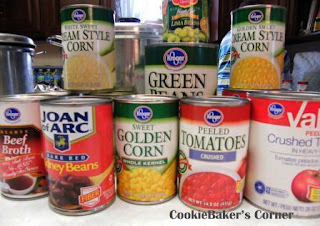 Now the really hard part.....the opening of the cans. 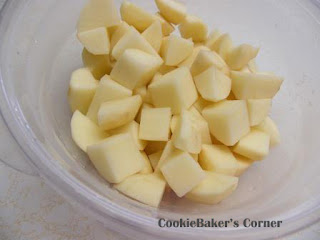 The the potatoes chopped into bite sized pieces and 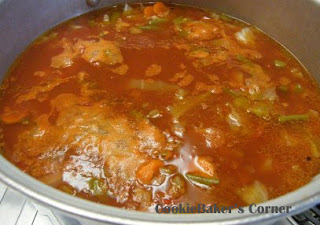 add to the pot along with the can of green beans and crushed tomatoes. 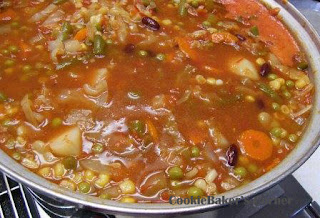 Add the remaining cans of vegetables.

Now we’re beginning to worry, we were running out of room in the stock pot and we still have to add the beef. As you can see the soup is all the way to the rim and the other stock pot was in the same condition. Jean pulled out a 10 quart Dutch oven and began to add soup from both stock pots to it. We were surprised that this had happened since we’ve made this before using the same two stock pots. Later Jean said that, since we couldn't find the right size cans of soup that we needed, she did add a little extra broth. 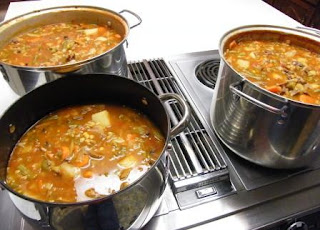 So we had the same problem my mother always ran into....the growing pot of soup. Although, as long as you have enough large stock pots or Dutch ovens, too much soup is never a problem. 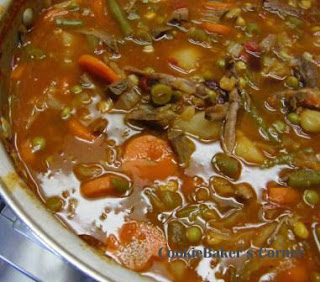 Now we have enough room to add the beef. Allow soup to simmer until the beef is heated through then taste and add more salt and/or bouillon if needed. We added a little more beef broth because the soup was even thicker than we like (and we like it thick) and we also added more bouillon and salt. Then we let it simmer a little longer. 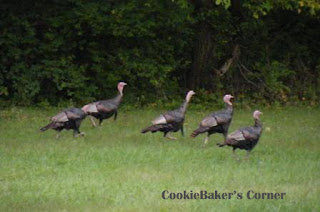 While waiting for the soup to finish cooking we saw more wild turkeys wandering around the edge of the woods. There were about seven this time but by the time I was able to take their picture, two had managed to get away from the group. It's a good thing the only thing I shoot with is a camera. Wonder what wild turkey tastes like? 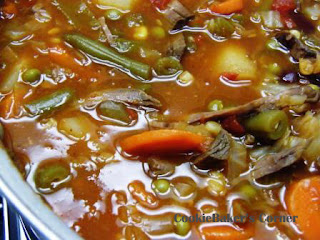 The soup is finished and we are tired and hungry so my sister, brother-in-law and I sit down to a meal of delicious homemade soup....yum!!!

Now all we have to do is find enough containers to for all that soup.
Posted by Cookiebaker at 7:09 PM