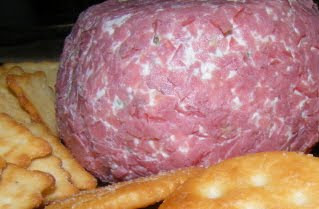 I always thought there was something mysterious about making a cheese ball.....
For years a cheese ball and crackers was served at our holiday meals...my sister, Dorothea, would stop by the Marsh Supermarket and pick up two cheese balls, one that had been rolled in pecans and one that hadn't been. We all loved eating them and even looked forward to them, almost as much as the chicken and dumplings, ham, dressing, turkey, etc.,.....until one year when my sister said that she could no longer buy them. I can't remember if it was because Marsh no longer made them or whether it was when Marsh became LoBills, I don' t know for sure...never the less we had to do without our yummy cheese balls. Heaven forbid one of us look up a recipe and prepare one. Why no one did, I don't know, my mother and my sisters were good cooks so I'm surprised that they never did. This was when I was in my teens and early 20's and wasn't interested in cooking, so I certainly wasn't going to try to make one. So we just did without...
Many, many years later....on my 40th birthday to be exact, the two women I shared an office with and our student employee, surprised me with a small party. Cake, ice cream and Robin, our student employee, came in with a cheese ball and crackers. It had been a long time...as soon as I took my first bite, I was hooked again...cheese ball was back in my life. I immediately asked Robin to share her recipe and she did...she's always been my favorite student....I'm not sure if it's because she was a nice young woman or because of the cheese ball. LOL...we do share a common interest in our love of food.
Robin, if you see this, we still have to get together for lunch or dinner, it has been over a year now.
So, our next family gathering saw the return of the cheese ball to our menu (kind of like the return of the McRib at McDonalds), and I don't think it's been off of it in the last....ahem, I hate to admit that I'm so old, 12 years. It's nothing special or difficult but you can't beat the basic, green onion and dried beef ball..yeah!
2 packages cream cheese (8-oz.)
4 green onions
2 small packages dried beef or 1 large, chopped
1/2 tsp. Worcestershire sauce
1/2 tsp. soy sauce
1/4 tsp. Tabasco (pepper sauce)

I didn't take pictures to document each step, one, because I forgot and two, it really isn't difficult. I just get out my chef's knife cutting board and just chop the onion and dried beef into small pieces. One hint that I do have is that you don't have to, but should you decide to roll the cheese ball in some of the dried beef, I've found that it's easier to do if the cheese ball has been chilled for a few hours. 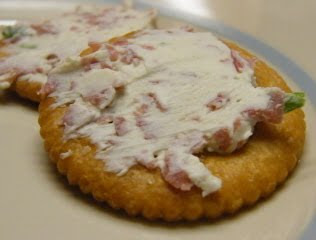 In memory of Robin Russell Grimsley who passed away unexpectedly on November 30, 2009

Posted by Cookiebaker at 1:09 AM

Email ThisBlogThis!Share to TwitterShare to FacebookShare to Pinterest
Labels: Appetizer

I made one of these for today! Jim and Shane can't live without it. LOL I roll mine in toasted pecans, yumo!

I smelled cheese and had to pop in for a visit. Awesome!!!!

I've never made a cheese ball before either. I must rectify this serious offense this year. I'll start with yours! It looks wonderful!

Robin Grimsley - I love it! I just shared your blog with Jim. He agrees that it is really good--better than any cheese ball that he has had. Thanks for thinking of me when you make it. I am glad your family enjoys it! I know mine does. I know that there are plenty of recipes that remind me of you---esp. the turtle brownies! Yes, we do need to do lunch or dinner. I'd like to catch up with you before the Christmas holidays if possible. Next week looks kind of busy, but perhaps the week after?!?!

November 27 at 9:17pm
Sheryle LancasterI think the week after this coming one is good for me. I'll have to wait until I get back to work and check my calendar to know for sure.

Oh, Sheryle, I guess this is the friend who had passed away that you had mentioned. I am so sorry, I was looking for this recipe to serve on Christmas eve. We have a family get together that night. What a special person to be lost at such a young age.