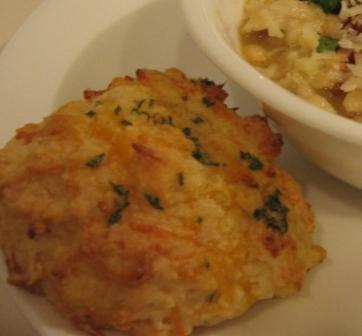 I don't go to Red Lobster often but when I do, I usually eat so many of their biscuits that I don't have room for my food and end up taking it home in a box for later. I've never really been much of a biscuit person, and when I do eat them, it's mostly at breakfast, but these are not your normal biscuits. I've wanted to attempt to make these biscuits and I've saved several recipes for them over the years, but never made them.

The November Challenge on BakeSpace was to make soup and bread. Well I'm not much of a bread baker...I make quick breads and have made yeast breads in the bread machine, but that's as far as it goes. I knew I would be making my recipes for the challenge while I was at Michael's and he doesn't eat much bread, so I didn't want to go to the trouble of attempting to make a yeast bread. After looking through my recipes, which is a daunting task in itself, I came across the recipe for Red Lobster's Cheddar Biscuits from the cookbook, Top Secret Restaurant Recipes by Todd Wilbur. Since I already knew I liked these biscuits and it looked easy enough, I chose this to make along with Texas White Chili.

Preheat your oven to 400 degrees.

Combine Bisquick with cold butter in a medium bowl using a pastry cutter or a large fork. You don't want to mix too thoroughly. There should be small chunks of butter in there that are about the size of peas. Add cheddar cheese, milk, and ¼ teaspoon garlic. Mix by hand until combined, but don't over mix.

Bake for 15 to 17 minutes or until the tops of the biscuits begin to turn light brown.

When you take the biscuits out of the oven, melt 2 tablespoons butter is a small bowl in your microwave. Stir in ½ teaspoon garlic powder and the dried parsley flakes. Use a brush to spread this garlic butter over the tops of all the biscuits. Use up all of the butter. Makes one dozen biscuits. 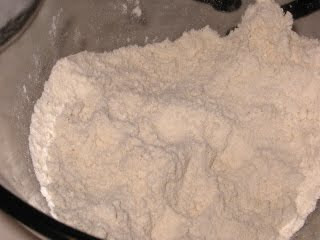 I know it's hard to tell, but this is after cutting the butter into the Bisquick...there are little pea size bits of butter in there. 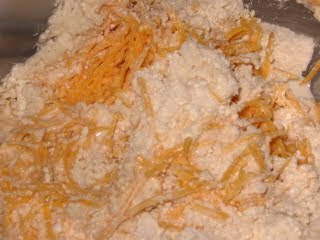 Milk, cheese and butter have been added and lightly mixed. 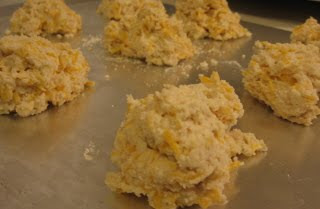 Micheal doesn't have an ice cream scoop so I just used the 1/4 cup measure and my fingers to drop the biscuits. 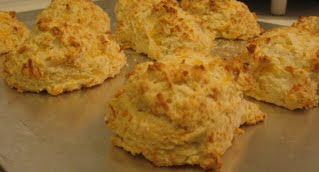 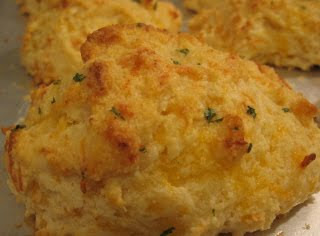 Brush with butter, garlic, parsley flakes and salt....Yummy!
Michael and I both liked these. They didn't taste exactly like the Red Lobster biscuits that I've had at the restaurant, but they came very close. The difference in the taste could be that I substituted Reduced Fat Bisquick for the regular and used low-fat cheddar cheese. They are definitely worth making again!
Posted by Cookiebaker at 10:15 AM

ooooh yum! i love biscuits and of course adding garlic and cheese just makes that much better!

I love Red Lobster's biscuits! These I'm going to try for sure!

I love those. Ive used the same recipe but used the healthy heart bisquick. I think its more of a whole wheat one but I cant remember for sure. Im glad u liked them