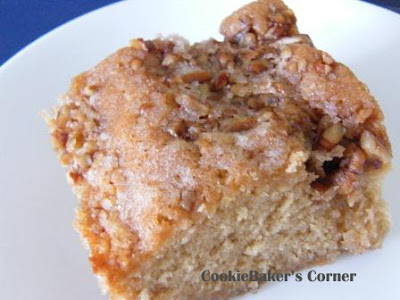 I may have mentioned this before but in case I haven’t, here it is…. I enjoy and prefer baking from scratch. I think it has a lot to do with the fact that when I was a child, even though my mom was a good cook, she usually baked with mixes…cake, brownie and even used a box mix for her pie crust. I rarely had a baked good that was made from scratch. I’ll get more into that subject in a future post. Even though I prefer baking from scratch, I am not completely against using shortcuts from time to time, especially when I come across recipes that use mixes as an ingredient and that look and taste good, not to mention are so easy to prepare. I have a few of those kinds of recipes that I’ve already posted about and here is one more.


I can’t remember when or where I found this recipe, but it’s another one that I used to make often and then eventually, after a while, I guess got bored with so stopped. It was very popular at work and it was easy enough to make that I could even prepare it in the morning, put it in one of those Pyrex carriers and it would be nice and warm by the time I and my co-workers arrived at the office. Because it’s so easy to make, It’s a great recipe to make on Christmas morning…..a nice warm coffee cake to have with a cup of coffee, tea or glass of milk….yum!
Easy Coffee Cake
Print Recipe

1. Prepare cake mix according to package directions. Pour into a 9x13 inch cake pan. After 15 minutes in the oven at the temperature stated on box, remove cake and sprinkle on a mixture of the chopped nuts, sugar and cinnamon. Then pour melted butter over all. Continue baking until done, 15 to 20 minutes.

Notes:
I've made this using a yellow cake mix and a spice cake mix, which are both good, but I prefer the caramel. The problem with using the caramel mix is that it isn't easy to find, the only place I'm able to locate it is at Meijer. 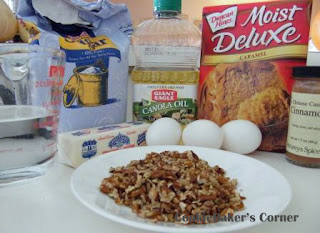 One cake mix, whatever ingredients that are needed to prepare the cake mix (the Duncan Hines caramel mix uses, water, oil and eggs), nuts, sugar, cinnamon and butter. When I first started making this, the Duncan Hines Caramel mix was easy to find....not so easy now. As I stated in the recipe notes, I'm only able to find it at Meijer. 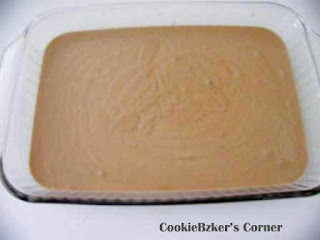 Prepare mix, according to package directions and pour into a 9x13 pan that has been coated with butter/oil and flour. I use either Baker's Secret or Pam for baking. Love the ease of just spraying it on in the pan. 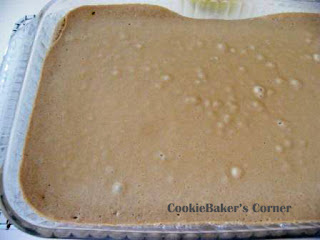 Place in preheated oven (temperature that is listed in the cake mix directions) bake for 15 minutes and remove. 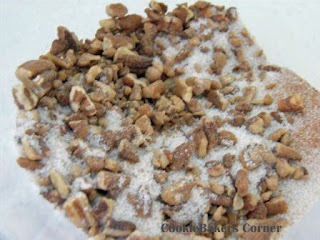 Combine nuts, sugar and cinnamon. I usually do this while the cake is baking. 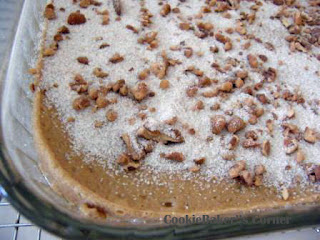 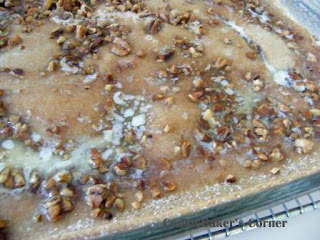 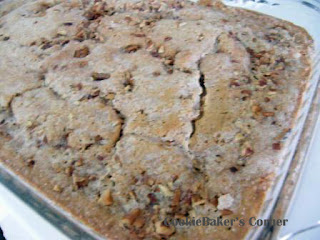 Return cake to oven and bake and additional 15-20 minutes or until cake is done. 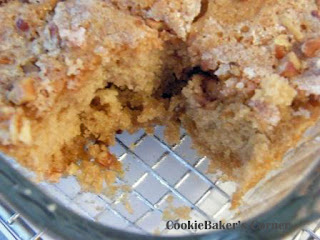 Hmmm, looks like someone was doing a little tasting while I had my back turned. 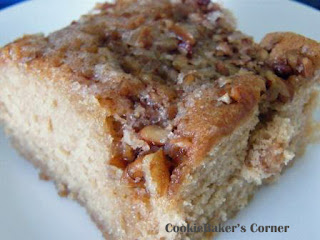 This was as good as I remembered. It smelled so good…the aroma of the caramel cake and cinnamon was wonderful. Apparently it was too much for Michael to stand since, as you can see from the previous photo, he tasted it as soon as it came out of the oven.
Posted by Cookiebaker at 2:15 PM