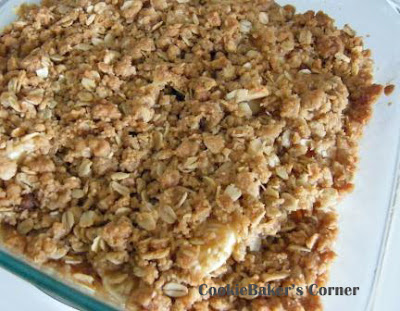 Whenever I think of apple crisp I think of school lunches. By the time I was in high school I refused to buy lunch at school mostly because the food was normally pretty awful. I would either take my lunch or, usually, not eat lunch at all and save the weekly $3.00 - $4.00 to buy gas for the car. Yes, back in the old days $3.00 would buy a lot of gas….I think gas was around seventy cents a gallon, maybe less. I would save my lunch money, combine that with babysitting money and/or allowance (babysitters made about $1.00 an hour) and I could fill up the car for around $10.00 and still have plenty left for a movie or going out to eat…maybe even buy a record or two, especially If they were 45’s.  Those were the days! Anyway, back to my story. One of the few times that I would buy the school lunch was on the day they served chili. The chili was actually quite good and along with chili I would get a peanut butter and honey sandwich and, one of my favorite desserts, apple crisp. The only time I ever got apple crisp was at school, Mom never made it and back then, I had no interest in cooking but I loved that stuff.
Many years later, I was in my 20’s and living on my own, I had some apples that I had been enjoying but wanted to do something with them other than just eat them raw, so I decided to try to bake something. I was new to cooking and baking at the time so wanted to make something simple. I pulled out my Betty Crocker cookbook and found a recipe for apple crisp…it looked like it would be similar to the apple crisp I had at school.  I peeled and sliced the apples, made the topping and put it in the oven. The aroma was heavenly, I love to smell apples, cinnamon and sugar baking, reminds me of home when my mom would bake apple pies. After it had baked and cooled a bit, I tasted it and was very pleased…it tasted just as I remembered, maybe even a little better than the apple crisp I enjoyed at school. 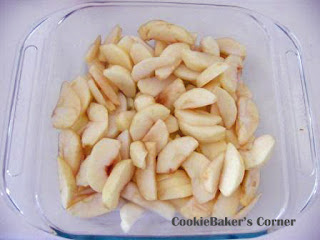 Place 4 cups of peeled and sliced apples in an 8x8 inch pan. I don’t know what apples I used, I had some Jonathan and Cortland that I just mixed together. 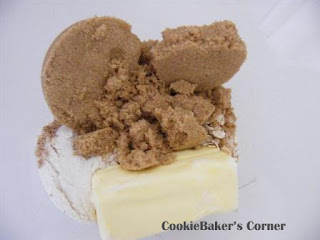 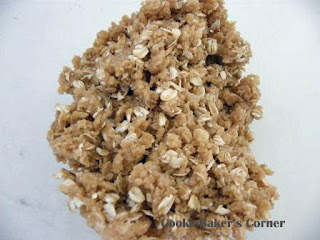 You can either use a fork, pastry blender or, as I usually do, your hands to mix the topping. 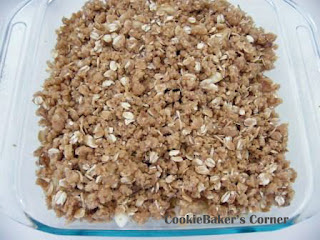 Spread topping over apples and bake. 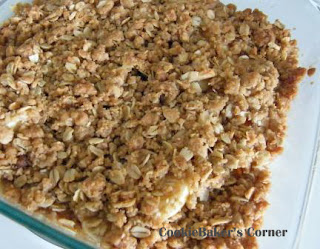 I baked mine just a little over 30 minutes, until the apples were tender.
Serve warm and, if desired, with light cream or ice cream 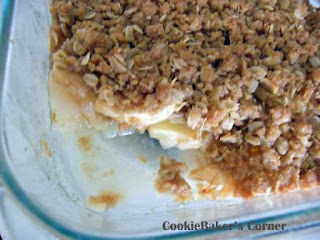 Once again, someone decided to dig in as soon as I turned my back. About half of the Apple Crisp was gone before I had a chance to eat any. It was definitely Michael approved!
Posted by Cookiebaker at 11:32 AM