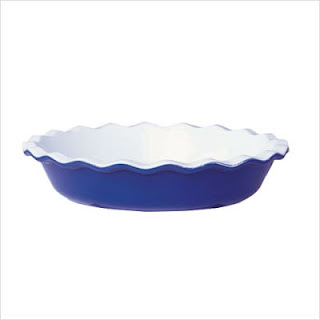 This has been such a long week...I didn't think the day of the drawing would ever get here. I've been so anxious to give away this lovely pie dish!

Before I name the winner, I thought I would explain how I did the picking. When I decided to do this giveaway, I was just thinking that I would do something like pick a name out of a hat...so to speak. I was talking to Michael and telling him about this giveaway when he suggested that I make a list of the entries in Excel with their names, along with a number for each entry then let Excel pick the winner...he's such a computer geek, but then that's one of the things I like about him. I laughed and told him that I didn't have a problem with setting up a list, I had already planned to do that, I'm good at making lists but setting up a formula in order to pick the winner was a whole different thing....I had no idea how to do that. My knowledge of Excel is very limited. So, once I set up my list....I added the name of each entrant along with a number for each chance (in the order that it was posted on the blog), I emailed it to Michael and he set it up so that all I had to do was press F9 in order to pick a number.

neonsafari is the lucky winner of the Emile Henry Pie Dish.

Congratulations neonsafari....email your name and address to me at, cookiebakr@yahoo.com, and I will forward it to the people at CSN Stores and they will send out the pie dish.

I would like to thank CSN Stores and all of you who participated in this contest.
Posted by Cookiebaker at 12:07 AM

Email ThisBlogThis!Share to TwitterShare to FacebookShare to Pinterest
Labels: Contests