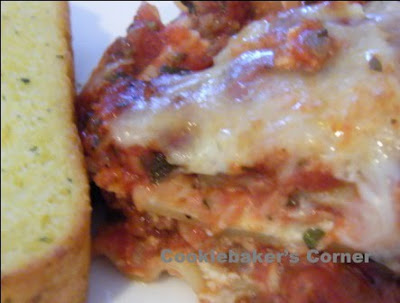 How do you spell it? I’ve seen it written both ways but my Word spell check suggests lasagna and since I can't stand those little red lines showing up under the words in my sentences, I'll spell it ending with an "a".

What can I say about this wonderful food? Nothing except that it is one of my favorite things to eat and that I could probably eat it every day and whenever I go to an Italian restaurant, this is always my first choice. I’ll vary from time to time but always go back to lasagna.

I can't even remember the first time I had lasagna. I grew up in a meat and potatoes home in the Midwest...not much experience with any other types of food. We did occasionally order pizza, or my older brother would make the boxed Chef Boyardee pizza mix.....or, when he started working at a local pizza place, would bring home dough, sauce and other ingredients and he would make pizza for us. He had even learned to toss the dough...I was impressed...of course, I was quite young at the time and impressed easily. We also had spaghetti, either canned Franco American or the boxed Kraft Spaghetti and Meat Sauce, in the red box. As you can see, my ethnic food experience was basically, non existent. I was probably in my 20's when I first had lasagna and I imagine I probably had it at Pizza Hut. Actually, while I was in my 20's, I also started eating Mexican and Chinese as well.

Detour over....back to lasagna....My lasagna recipe started out with one that I found in Betty Crocker's International Cookbook, published sometime in the 80's. The recipe from that cookbook served me well for many years, then I started tinkering with it…combining different ideas and techniques that I picked up from other recipes or articles that I’ve read or what I’ve seen on cooking shows, so it has changed a good bit over time and now barely resembles the original.
Before I started on the lasagna, I typed up what I hoped was the final draft of my recipe and since my computer isn’t hooked up to Michael’s printer, I emailed it to him and asked him to print it off for me. I wanted a hard copy so I could make notes or corrections, if needed. As I was reading over the printed recipe, I came across a sentence that I didn't remember typing….apparently there are gremlins at work here…..“Serve to Michael, but stay out of his way, as he stampedes to consume the whole pan!!!!!!!” Funny guy! 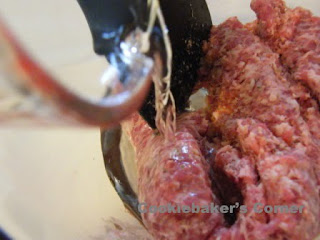 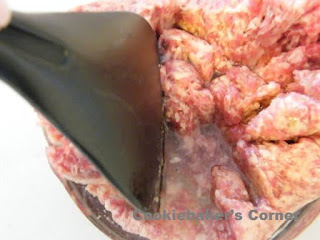 Mix 1/4 cup white wine with sausage. I read somewhere that this will keep the sausage from cooking up into lumps. 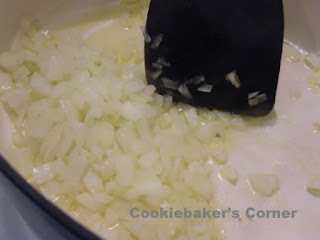 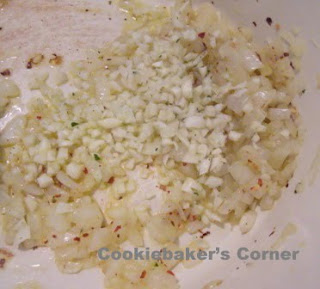 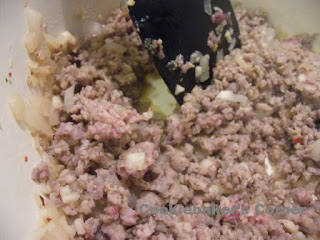 Add sausage and brown. Adding the wine to the sausage did keep it from cooking up into lumps....in the past it almost looked like I had little meatballs in my sauce. 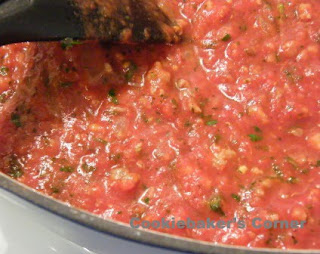 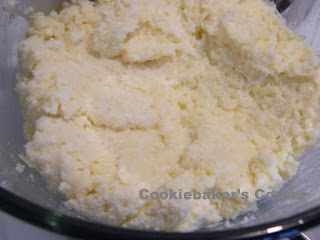 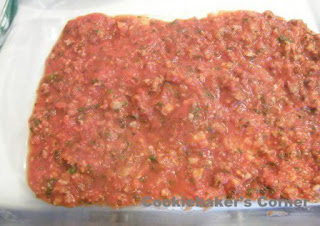 Spread sauce in bottom of pan. 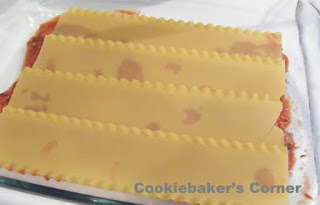 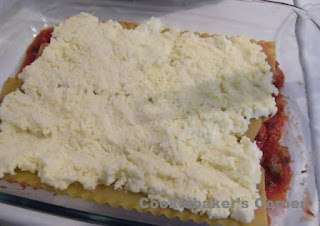 Spread half of the cheese mixture over the noodles. 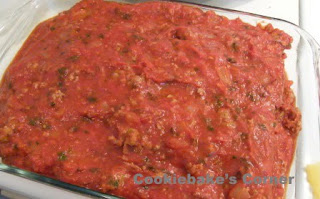 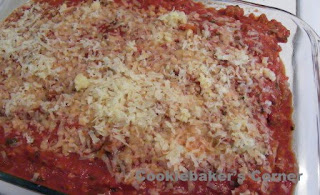 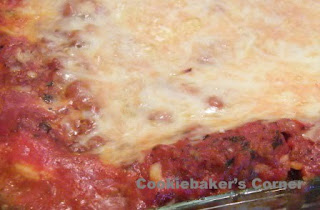 Bake according to instructions, let rest and enjoy.
Michael  "the takeout king" thought I was going to entirely too much trouble to make lasagna...he thinks Stouffers makes a good one. Once he tasted it, he did change his mind....he exclaimed that, "It was the best lasagna I've ever eaten." I'm not sure if he really believes that or is afraid if he doesn't say it that I'll stop cooking.....

Posted by Cookiebaker at 6:36 PM

Lasagne (sp? LOL) is sooo darned good! And when made from scratch is the best...lots of cheese of course hee hee

MMMM MMM MMMM You are speakin my language! YUM-O-RAMA!!!

Oh, I think "lasagna" is 1 noodle and "lasagne" is more than one.

It matters not to me, for it's all delicious! :)

I just love your posts. Sounds like we totally grew up with the same food! Your lasagna (yeah, with an "a") sounds and looks wonderful. I think I'd have to beat Micheal off with a stick...it would be a duel indeed LOL