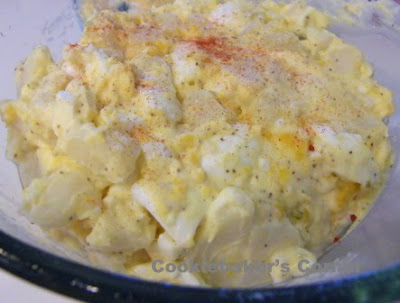 It's that time of year again.....the time of year when I think about picnics, family reunions and grilling out. When I think of all of those events I also think about food.....who am I kidding, I always think about food, but I especially think about it for special occasions. One of my favorite dishes to have at a summer gathering is potato salad....deviled eggs is another but I'll talk about that in another post. Potato salad....what can I say about it.....except that there are many variations on how to prepare potato salad and I’ve noticed that most people are very picky about which they enjoy eating. I like my sister Dorothea's potato salad which is just your basic mayonnaise based salad...actually our whole family likes it, we like it so much that potato salad is what she is always expected to bring to our family gatherings.

Several years ago I decided that I wanted to make potato salad and asked my sister for her recipe. Unfortunately, she didn’t have one. She told me that the way she learned to make it was from a job that she had when she was in high school. She waitressed at a local place called, I think the Sunshine Restaurant, where the cook made the potato salad; Dorothea said that she liked it so much that she asked the woman to show her how to make it. Anyway, my sister gave me a list of ingredients and then proceeded to tell me how many pounds of potatoes and dozens of eggs that she used…of course this was enough to feed our large family. Other than that, she couldn’t give me any help with the amounts of anything else. To start out…I decided that since I didn’t plan on feeding an army, I would definitely cut down on the amount of potatoes and hard boiled eggs. Once I decided on that, all I had to do was work with the rest of the ingredients. So, after a lot of trial and error, I’ve come up with something pretty close to.....

Cover potatoes with water and boil for 13-15 minutes, until tender. I add a little salt to the potatoes while they are boiling.
While potatoes are boiling, in a large bowl make dressing by combining 2 cups Miracle Whip, onion flakes, sweet pickle relish and celery seed.
After the potatoes had been cooked and drained, and while hot, add potatoes to the dressing mixture.
Mix in chopped eggs.
Cover and refrigerate for at least two hours but it's better if it sets in the fridge overnight.
The next day stir the potato salad and if it looks a little dry, add the rest of the Miracle Whip...or more, depending on how moist you like it.
If desired, sprinkle with paprika before serving.

*Ingredients can be adjusted according to taste. 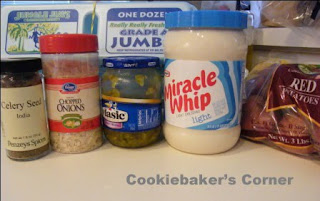 You'll notice that I use Miracle Whip Salad Dressing instead of mayo...this is one of the few times that I do this. This is what my sister uses so I decided to do the same....afterall, I wanted it to taste as much like her recipe as possible. She told me that she uses dried onion instead of fresh because a lot of people don't like biting into onion...this way she gets the taste without the texture. The potatoes that I like to use are either red or Yukon Gold, I feel like they hold up better than a russet....that's just my preference. I generally use jumbo eggs...the only reason for this is that, since I'm boiling and peeling eggs (a job that I really don't care for) I figure I may as well boil enough to make deviled eggs and I just like the larger eggs for that....besides they fit in my egg carrier better too. As with all cooking, you don't have to be exact...you can use mayo, fresh onion, any size egg and any potato that you choose. 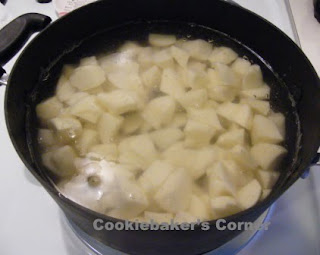 When I first started making potato salad, I was always told to boil the whole potato, skin and all, drain them and peel while the potato is still hot. I often wondered what sadist came up with this idea....have you ever tried to peel a smokin' hot potato? It isn't easy or fun! Come to think of it, I think it was my mom who told me that...maybe she was trying to get back at me for the pain of childbirth. Lately I've noticed that whenever I see someone on a cooking show making potato salad or a recipe, they peel and chop the potato first, then boil it. This time, I decided to try it this way...... It worked perfectly, was painless and also cooked in a lot less time. By the way, you don't have to peel potatoes, especially if using red or Yukon Gold but I do....I prefer my potatoes naked. 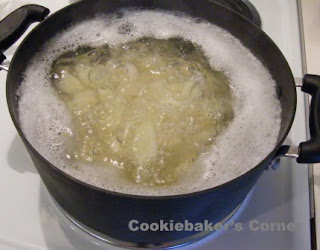 Boil potatoes until tender - I usually put a little salt in with my potatoes while they are boiling. 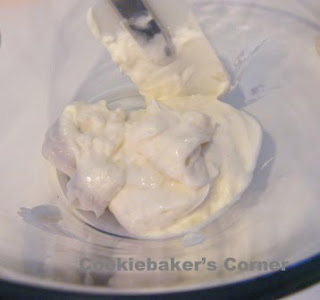 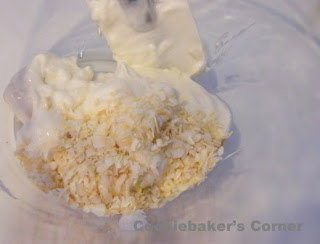 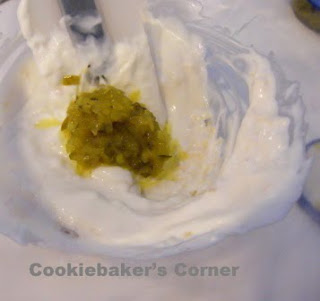 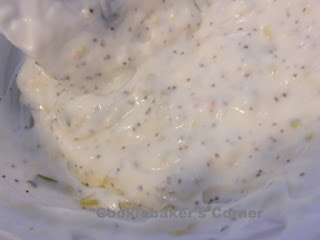 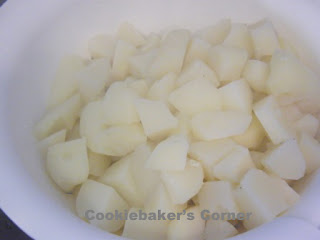 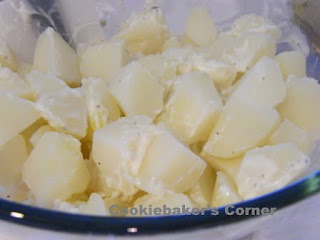 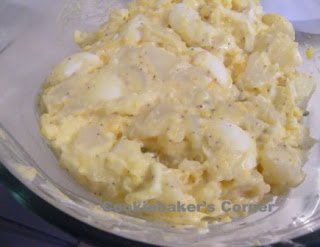 After the potates have drained and while they are still hot, gently mix in the dressing mixture then add the chopped eggs. At this point, I like to give it at taste to see whether I need to add a little more pickle relish, celery seed or salt. Cover and refrigerate. I like to make mine the day before I need it so it can chill over night. The next day stir the potato salad and if it looks a little dry add a little more Miracle Whip. 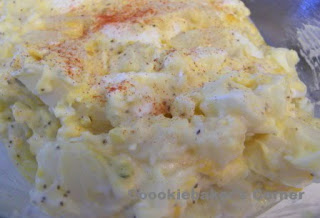 I like to sprinkle on a little paprika before serving.
There you have it.....my favorite potato salad! I don't think it compares to my sister's but it's almost there...
Posted by Cookiebaker at 12:57 AM

you are so right about how picky people are with potato salad. One thing added that you're not use to and it's hard to get passed it LOL. My husband is very particular about how he likes it. Thank God it's how I make it hahaha. My biggest challenge is over cooking the potatoes :(
this recipe looks wonderful. I wonder if I could get away with trying some of your ingredients (shhh...don't tell my husband)

I love to eat potatoes very much and all the recipes of potato. Even I like to eat only boiled potato also. The salad you have made and shared recipe over here is really yummy and I am going to try it very soon.
florida villas

I love potatoes salad. But sometimes overdose not good for the stomach. Here I was seen that you write the recipe for the potato salad. I think it's easy to made also. Thanks for the recipe.