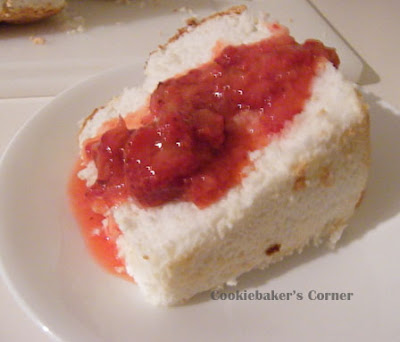 I have to admit that I love rich, decadent, gooey desserts filled with caramel, chocolate and other ingredients that make them almost sinful. Every now and then I like to go a little simpler and that’s when I go to plain vanilla or chocolate ice cream, pound cake and angel food cake.

Lately I’ve been making a lot of potato soup, trying to perfect my mom’s recipe, and since her recipe calls for rivels, I’ve been using a lot of egg yolks which means I now have acquired a large supply of egg whites. In the past I would have just tossed the egg whites knowing that I would probably never use them, but lately I’ve been trying to be more thrifty and less wasteful so have been freezing the egg whites. I hadn’t thought much about what I would do with the abundance of egg whites that was quickly taking up valuable freezer space until one day when I started craving angel food cake.
I don’t believe I’ve ever eaten homemade angel food cake, when I go out to eat and if I have room, I go with one of those yummy rich desserts, I know I’ve never made one however, I did use a box mix to make one at least once or twice. I don’t remember my mom ever making one either, she didn’t do a whole of baking from scratch by the time I came around, although she must have years before because I have her tube pan. She and I usually just bought our angel food cakes from the supermarket, which really aren’t too bad. So I began my search for a recipe. I pulled out my old, old Betty Crocker cookbook, I always turn to the old faithful’s (Betty Crocker, Fannie Farmer or Joy of Cooking) at times like this and they rarely fail to provide me with instructions on basic cooking and baking. I began and ended my search with Betty Crocker; I not only found one but two recipes, not to mention several sponge cake recipes as well.
Angel Food Cake Deluxe
Printer Friendly Version

1. Heat oven to 375 degrees. Stir together flour and first amount of sugar; set aside.

3. Bake 30 to 35 minutes or until top springs back when touched lightly with finger. Invert tube pan on funnel, let hang until cake is completely cool. 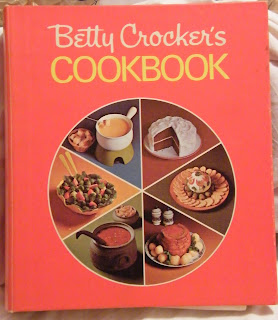 I've had this cookbook for a long time, it's probably the first or second one I owned. My mother gave it to me when I was in high school or a year or two after I graduated so it would have been sometime in the mid to late 70's. The funny thing is, at that time I wasn't much into cooking so rarely used it but Mom did, she used it mostly for her apple and cherry pies. I hadn't looked at this book in several years and when I decided to make an angel food cake, pulled this one off of the bookcase to find a recipe. I got carried away by just looking through it....most of the recipes are recipes that require actual cooking with a few that require some type of pre-packaged addition. No microwave instructions at all, unlike so many of the newer cookbooks. 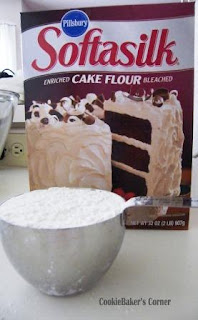 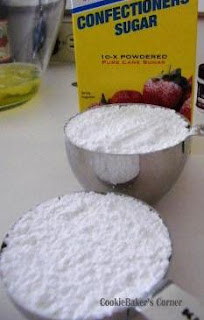 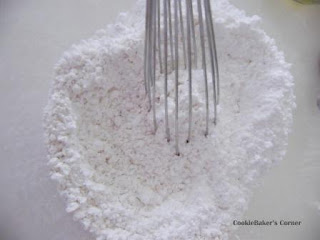 Stir together the flour and confectioners sugar. 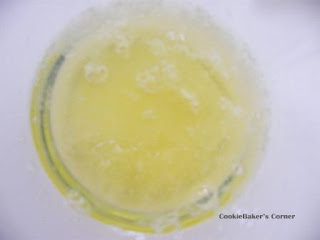 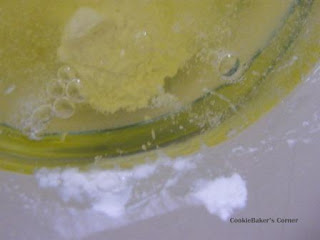 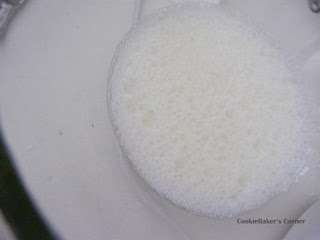 I know it isn't easy to see this, but the egg whites, cream of tartar and salt were beat until foamy.

Add the granulated sugar, 2 tablespoons at a time and beat meringue on high speed until it forms stiff peaks. I know, I forgot to take a picture of the sugar being added because I'm just forgetful that way. I'm sure you can picture it yourself. 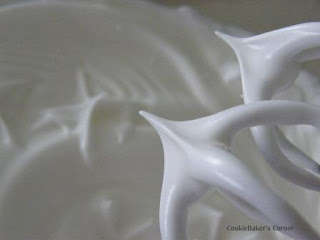 Isnt' this pretty? I think it is....I love how satiny, smooth and creamy it looks.

If you have a stand mixture, I highly recommend that you use that at this time. I used a good hand mixer and it took a long time for the mixture to form stiff peaks, I’m sure my stand mixer would have accomplished this much quicker. 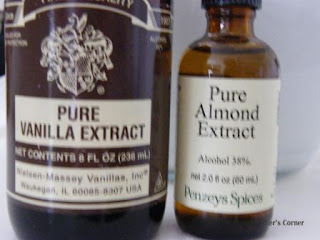 I use "pure" vanilla and almond extracts....I just like them more than imitation. 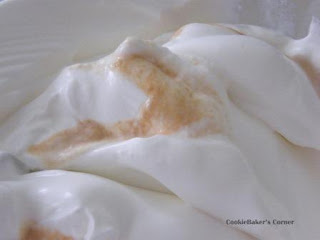 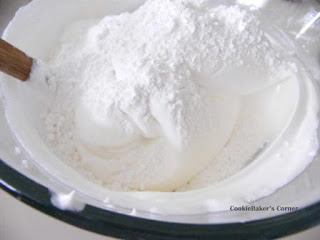 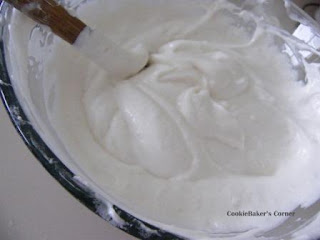 Gently fold in flavorings and flour mixture. I’m not sure I can explain how to fold but I’ll try. I use a rubber spatula and gently cut into the middle of the meringue, go to the bottom of the bowl swiping the bottom and side as you pull up. I do this while turning the bowl each time…you don’t want to stir because that will cause the meringue to deflate. You want to keep as much air in the meringue as you can. I saw an America’s test kitchen that showed them using a balloon whisk to do this. You can search the internet and YouTube for instructions and videos that show this procedure. I’m constantly amazed at all cooking videos on YouTube. 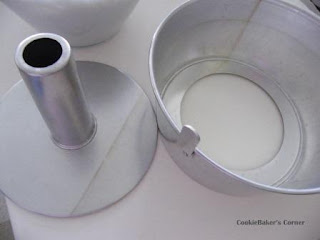 This was my mom's tube/angel food cake pan. There are tube pans that come in one piece but I like this one because it is two pieces, it makes removing the cake much easier. 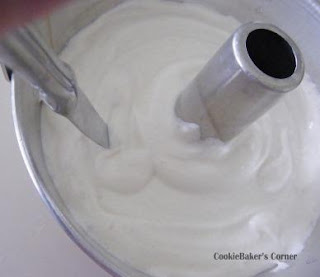 Still working gently, scrape the batter out of the mixing bowl and push into an ungreased tube pan. Take a knife and cut through the batter. I think I can explain this process a little better than folding, then again, maybe not. Insert the knife blade about halfway into the batter and drag the blade through the batter while turning the tube pan. 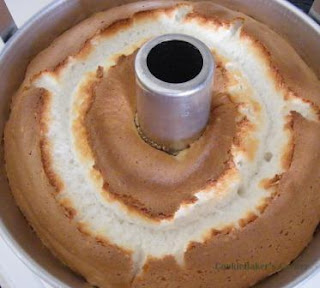 Bake 30 to 35 minutes or until top springs back when touched lightly with finger. 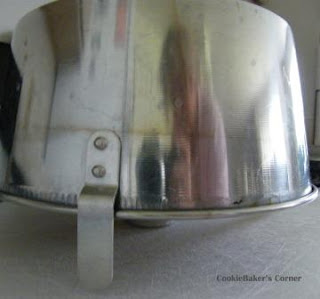 Invert tube pan on funnel, let hang until cake is completely cool. If you don't have a funnel, you can use a glass bottle. Another thing I like about this tube pan is that it has these little legs on it eliminating the need to use a funnel.

Pay no attention to the reflection of that woman in the pan. Try as I might, I couldn't keep my image out of there so I guess you're stuck with it. If I had known this would have happend, I would have dressed better and done something with my hair.....scary, I know. 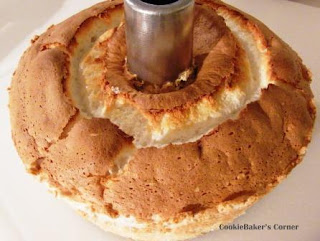 Once the cake has cooled, run a knife or metal spatuala around the rim of the pan (between the cake and the pan) and remove the cake. The third and final thing I like about this pan is that it makes it very easy to remove the cake. Once I run my spatual around the rim of the pan, I remove that and then run the spatula along the bottom (between the pan bottom and the cake) to loosen and remove. 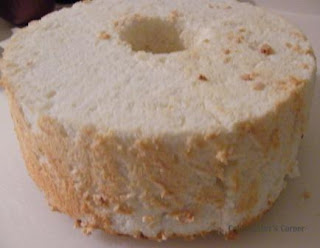 Success....my very first Angel Food cake! I like to serve this with fruit or eat it just by itself. Today I took a bag of frozen strawberries, mashed them up a little and added some sugar...yum!
Posted by Cookiebaker at 7:14 PM

Email ThisBlogThis!Share to TwitterShare to FacebookShare to Pinterest
Labels: Cake

this is one of my favorite desserts....angels food cake with strawberries (and whipped cream). I've never made it before. Not sure why. Now that it's strawberry season, I think it's time. Yours looks fabulous!!!

This was my first angel food cake....not sure why I've never made one before either. Guess because I've found pretty good ones at the supermarket. It's definately a great way to use up egg whites.