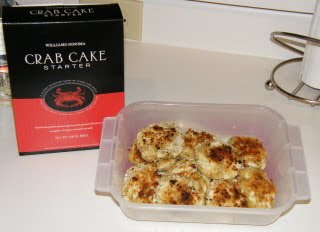 Michael and I met, via Internet, on November 2, 2008 and it didn't take me long to realize that he liked seafood and especially liked crab cakes. It seemed as though whenever we would talk on the phone, he had just finished eating crab cakes, or was getting ready to eat them for dinner. On our trip to the Carolina's, while in South Carolina, he usually ordered a meal that had some type of crab in it, and more often than not...you guessed it, it was crab cakes. Then and there I decided that sometime I was going to make some crab cakes for him.

Not being a seafood lover myself, I felt mystified at preparing anything that wasn't poultry, beef or pork. One day, while shopping in Williams-Sonoma, I picked up a Crab Cake mix...I thought this would be an easy way to make them, and they should be good. I was afraid if I tried something from scratch, it could be a failure. I left the box of mix at Michael's and finally on Sunday, got around to making them.

I looked everywhere trying to find Jumbo Lump Crab...I found some on the shelf at Kroger, but wanted something a little more fresh. I was shopping at Jungle Jim's one day and went into their seafood shop and found a 1 pound can...it was in the cooler section and said it was to be kept refrigerated. So, I packed it in my cooler and took it to Hilliard with me. I wish I could remember the brand of crab that I bought...the crab was very nice indeed. I'll buy it again sometime and post the name.

Sunday night, around 9:00 PM, I decided to make the crab cakes. I had been trying all weekend and something always came up. Actually wanted to make them for Michael's birthday on Saturday, but ended up going out to dinner with a few members of his family. Anyway, I opened and drained (I was impressed because there wasn't much to drain) the crab then proceeded to follow the directions on the box....that was the easy part. The box of crab cake starter consisted of two packages of bread/seasoning mix and two packages or panko crumbs...this way you can make crab cakes using 1/2-1 lb. of crab. When I tried to make the crab and bread/seasoning mixture into patties, I couldn't get them to hold together....needless to say, when I tried to turn them in the pan, they fell apart. I was not at all happy! Michael kept saying that it wasn't important as long as it was good. Not being someone who likes to cook, he doesn't understand that we want the food we prepare to look nice as well as taste good. Around the time I tried making the fifth cake, they started staying together, so I ended up having several crab cakes...intact. Michael and I sampled some of the ruined cakes and both decided this mix was quite tasty.

The next time I make crab cakes, and there will definitely be a next time, I want to make them from scratch, although I will pick up another box of this mix when I'm in Williams-Sonoma, to keep on hand for a quick meal...it was delicious. That says a lot coming from a meat and potatoes girl.
Posted by Cookiebaker at 7:13 PM