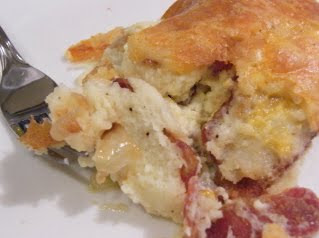 Since Michael and I rang in the New Year in such a wild and crazy way....he napped until about ll:45, then we watched Dick Clark's Rockin' New Years Eve until the ball dropped, toasted to the New Year with sparkling grape juice, (no midnight kiss...he has a cold and I didn't want his cooties) then went to bed....we decided to take it easy this morning and not rush out to breakfast. By the way, we decided that we are really old...not only did we have a difficult time staying awake until midnight, but everytime a new entertainer would come on the show, we would look at each other and ask, "who is that?"  We also decided that we couldn't understand how the young people today could listen to that music...our music (music from the 70's) was much better. Yes, our generation gap was definitely showing last night. Anyway, back to food, I went to one of my favorite breakfast recipes..Fluffy Oven Eggs and Bacon...an egg casserole...I love these things!

I got this recipe from a friend and former colleague, Cindy Keller. She brought this in for one of the many breakfast parties that we had at work. That's usually how we celebrated, we all loved to eat but really loved breakfast so for any going away party (like mine) we had breakfast. If I remember correctly, she told me that she got it off the back of the Bisquick box.

Whenever I make this for myself, I make it as the recipe reads...I have enough for that meal and plenty leftover for a few more. When making it for Michael and me, I triple the recipe, except for the bacon (just used one pound), and the salt.

I sometimes triple this recipe for a 9x13 dish. Add about 5 or 10 min. to the baking time too. 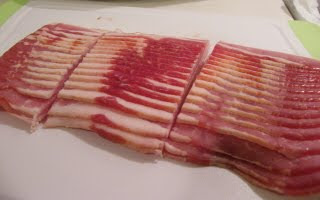 One pound of bacon cut into thirds. Next time I make this, I may chop the bacon...I think I would like it better in smaller pieces. 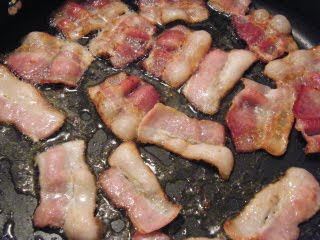 I used my largest frying pan for frying the bacon. Since I was frying a whole pound and was trying to keep the splatter down, I drained off the fat a couple of times. I saved it for later use....I'll be making fried potatoes later and they taste wonderful fried in the bacon drippings. 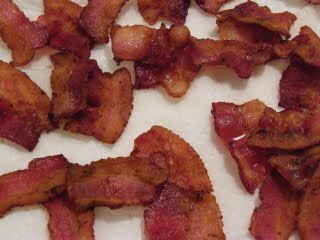 Since I was frying so much bacon, I did it in batches, I also fried it longer than the recipe says...I like my bacon well-done. 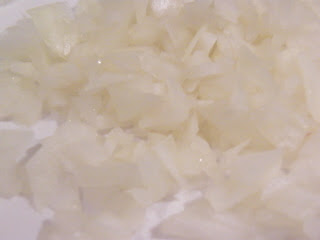 Onion...finely chopped. I didn't measure the onion...I had half of a large onion left over from something else so just used that. 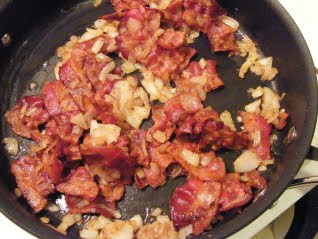 Does anything look or smell better than this? 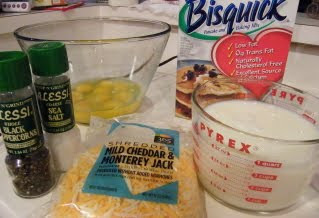 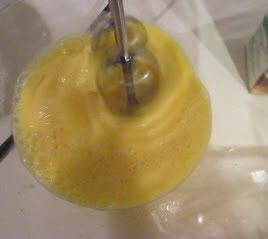 Since I was making a tripple recipe and needed nine eggs, I beat them a little before adding the dry ingredients. 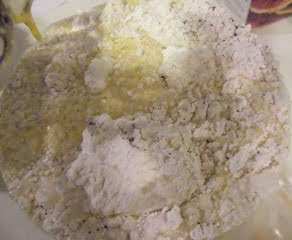 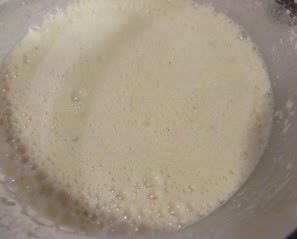 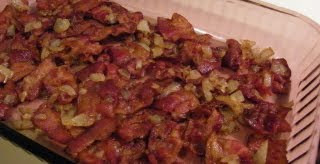 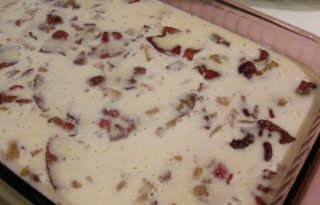 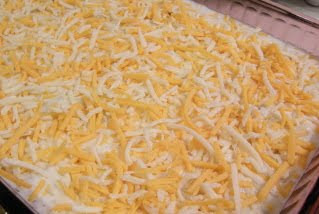 Top with cheese...I didn't measure here, just put a lot of cheese on top...we like our cheese. 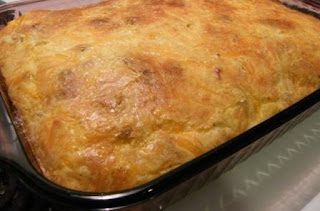 This was sooo good! Of course by the time we had to smell the bacon and onions frying, then smelled it while it baked, we were definitely ready to eat. We had plenty for breakfast and enough left for a few more meals.

One thing I like about egg casseroles is that, once you have the basic recipe, you can add anything to it that you like. You can easily make this into a Western Egg Casserole by substituting ham for the bacon and adding some green pepper. Or if you want sausage instead of bacon...just use that. As for the cheese, this time I used cheddar Jack cheese...my favorite...yum!
Posted by Cookiebaker at 11:09 AM

Oh yummm that looks great! I'm going to try it! Thanks for sharing.
Happy New Year to you both!

This looks so good, Sheryle! Happy New Year to both you and Michael. Enjoy your retirement!:)

I LOVE breakfast egg casseroles like this... I never get to make them though cause there's never anyone else around to eat them... :(