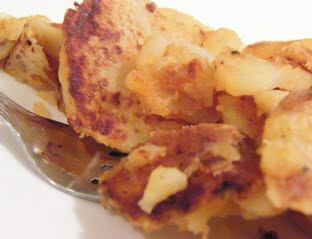 I love potatoes….love them baked, mashed, boiled, roasted...any way they can be made, I enjoy eating them. One of my favorite ways to eat them is fried. When growing up, one of my favorite meals that my Mom used to make was salmon croquets, creamed peas and fried potatoes, so the other night I decided to make a variation of that meal for Michael and me. I prepared, crab cakes, peas (didn’t cream them..not sure Michael would go for that) and fried potatoes.

My mother made the best fried potatoes…they were a combination of soft and crispy. One of the reasons they were so good is that she fried them in bacon drippings. When I was little, she fried everything in either bacon drippings or lard…that’s just what you did back in the 60’s and before. She eventually switched from lard to shortening then to vegetable oil, but she always kept a small canister of bacon drippings by the stove where it was handy, to put  a spoonful in her green beans and to use in her fried potatoes. I'm sure she used it for other things but these are the two that stand out..guess it's because I liked them so much.

Since I try to be a little heath conscious (can't tell by looking at me), at least some of the time, I don’t eat much bacon, therefore rarely have or use bacon drippings. I don’t fry potatoes often either…carbs are the enemy (ooh, but I do love them)…especially for us diabetics, but when I do, I usually fry them in butter. During the holidays and while I’ve been staying at Michael’s, I’ve splurged and indulged in bacon and potatoes. I fried a whole pound of bacon to make my Fluffy Oven Eggs and Bacon and saved the drippings, knowing that I would be making fried potatoes later.

For the fried potates I used:

Peel and slice potatoes. I have this handy gadget called a V Slicer (an inexpensive mandolin) that I use, almost exclusively for making fried potatoes. It slices the potatoes quickly and much more evenly than I can, using a knife. 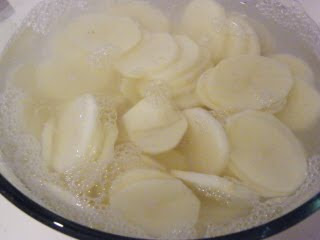 I tried something new this time; I soaked the potatoes in cold water. I read that it helps remove a lot of the starch from the potatoes. It did seem to work…my potatoes didn’t stick together as much as they usually do. 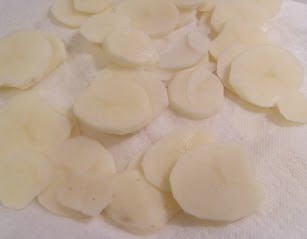 Remove potatoes from water and dry. I layered them on a plate, placing towels between each layer. 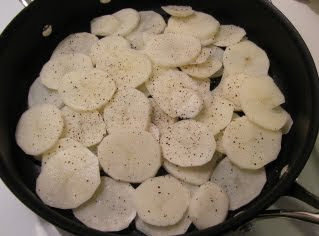 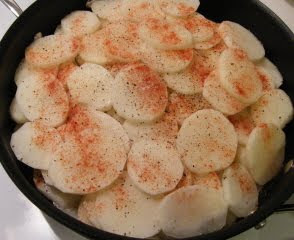 I preheated a large frying pan, on medium heat, placed some of the bacon drippings in the pan and then put a layer of potatoes in….sprinkled with salt; pepper and paprika…repeat this process until all the potatoes were in the pan.

Mom never used paprika but I recently started doing so. One of my favorite breakfast/lunch restaurants, Patterson’s Café (previously known as Uptown Bakery and Café) in my hometown of Oxford...which, by the way, makes a killer grilled meatloaf sandwich, uses it on their potatoes and I like the additional flavor it adds. Mom always used paprika as more of a garnish…to add color to potato salad, deviled eggs, etc, never as a seasoning. 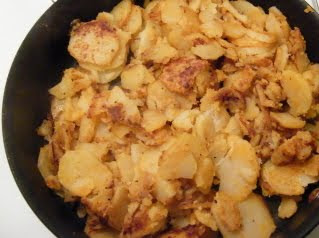 These are so good! This picture was taken before I covered them with ketchup...yes, I'm one of those people who put ketchup on home fries, hash browns and fried potatoes. Even with the ketchup, I could still taste the hint of bacon that you get from frying the potatoes in the bacon drippings.
Posted by Cookiebaker at 1:17 PM

I love potatoes too!! especially fried...mmmm. I like layering some sliced onions with them too. I should try your water soaking method. The paprika gives them a nice color. Thats another thing I should try next time.

My mom made these as well!
When we were in France, our host made this dish in a cast iron skillet, and slow cooked the potatoes with fresh mushrooms, onions, and bits of pork called lardons- sort of a ham/bacon piece of meat. It was just like my mother's- her family came from France.
(And yes, ketchup adds that certain zest that makes it heaven on earth.)